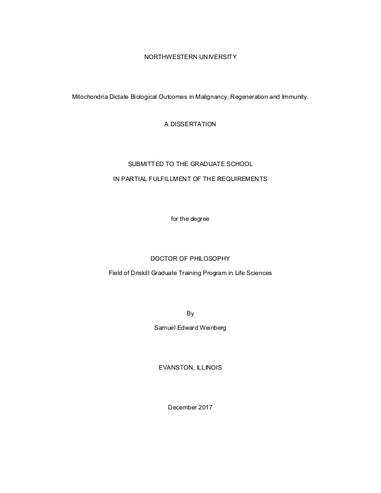 The study of tumor metabolism from the middle of the 20th century through the early 21st almost entirely ignored the mitochondria; instead, the field focused on cancer cells use of glycolysis even when oxygen was not limiting, termed aerobic glycolysis. Due to this observation, it was often speculated that malignant transformation was in fact the result of mitochondrial dysfunction. Despite this long-held belief, there existed very little evidence that mitochondrial dysfunction actually existed in cancer. Importantly, recent studies by the Chandel lab and others have now clearly demonstrated that mitochondrial function is in fact required for tumorigenesis. These studies have raised the interesting possibility that targeting mitochondrial metabolism may be a useful therapeutic target for treating cancer. A large body of retrospective and prospective studies have suggested that metformin decreases the incidence of cancer while also increasing the survival of patients with a variety of malignancies. The prevailing view was that metformin decreased malignant transformation and growth through its ability to decrease growth factor signaling secondary to its insulin lowering effects. The so called organismal model, postulated that metformin had no cell autonomous role on the cancer cell. Interestingly, biochemical analysis of metformin suggested that it could work as an inhibitor of complex I of the mitochondrial electron transport chain. Based on previous work from our lab detailing the importance of mitochondrial metabolism in tumor cell growth, another graduate student in the lab and I hypothesized that metformin may have a direct effect on tumor cell growth through its inhibition of complex I. In order to test this, we introduced the yeast NDI1 protein in cancer cell lines. NDI1 functions similarly to mammalian complex I except it does not pump protons across the mitochondrial membrane and is also resistant to metformin inhibition. Cancer cells treated with metformin display impaired growth in vitro and this could be rescued by the expression of complex I. Furthermore, expression of NDI1 rescued cancer cell growth in a xenograft model, demonstrating for the first time a specific cancer cell autonomous role of metformin inhibiting tumor growth which was independent of alterations in growth factor signaling. Since this study’s publication, additional groups have observed the same effect of metformin in clinical samples, and there has been a significant effort to understand if other mitochondrial inhibitors may display efficacy against tumor growth. One major hurdle to the treatment of cancer using mitochondrial inhibitors is the potential for off target effects on normal cells that require mitochondrial function. Specifically, hematopoietic stem cells (HSC’s) and T cell dysfunction are common side effects of cancer therapies. Importantly, like cancer cells both HSCs and effector T cells display a metabolic profile characterized by elevated levels of glycolysis even in normal oxygen conditions. We hypothesized that mitochondrial signaling through alterations in metabolite levels such as acetyl-CoA, alpha-ketoglutarate or mitochondrial produced reactive oxygen species may impair HSC and T cell function. To test this in HSCs, a former post doc in the lab and I, produced mice that specifically lack mitochondrial complex III in HSC’s. These mice do not live past embryonic day 18.5 due to a failure to produce any mature red or white blood cells. Ultimately, we uncovered that loss of mitochondrial complex III in adult and fetal HSC’s results in a failure of HSC differentiation into any downstream lineage, but HSC proliferation and self-renewal is not impaired. At the same time as this study, I also was investigating the role of mitochondrial complex III in regulatory T cell (Treg cell) function. Tregs are a unique subset of CD4+ T cells that function as the suppressive subset and work to downregulate immune responses. Interestingly, compared to other inflammatory T cell subsets, Tregs display a metabolic program shifted towards mitochondrial metabolism in vitro. To test if mitochondrial metabolism is required for Treg differentiation and function, I generated mice lacking complex III specifically in Tregs. These mice develop a lethal autoimmune disease during the third week of life similarly to mice lacking FoxP3, the Treg lineage defining transcription factor. Importantly, Tregs deficient in complex III do not display defects in activation, survival, proliferation or Foxp3 expression, but they do display an impairment in suppressive function. In this way, it appears that T cell compartment has a dichotomy where metabolic programs may underlie cellular functions as previously observed in HSC’s. Interestingly, in our search for the underlying mechanisms for both of these phenotypes we have found the epigenetic landscape of both HSC’s and Tregs are profoundly altered in the absence of mitochondrial function. Additionally, we have found that HSCs and Tregs lacking RISP have increased levels of succinate and 2-hydroxyglutarate. Both of which act as inhibitors of the α-ketoglutarate-dependent dioxygenase family of enzymes which include the DNA demethylase (TET) enzymes and the histone demethylase family of enzymes. Our data suggests that buildup of these metabolites in presence of mitochondrial dysfunction impairs the methylation landscape of the epigenome in Tregs and HSCs that results in a failure of suppressive function and HSC differentiation respectively. Although it has been hypothesized that alterations in TCA cycle metabolites can change the epigenetic profile of a cell, these two studies are truly the first to clearly link them to alterations in biologically relevant systems, while also suggesting that 2-HG may function as new mitochondrial derived signaling molecule in settings of mitochondrial impairment.