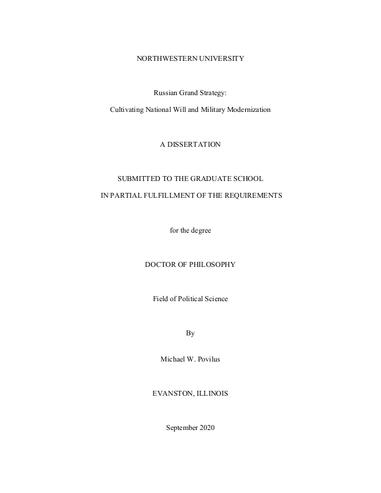 Does the Russian Federation in the Putin-Medvedev era follow a grand strategy, and if so, what does it look like, and how can we discern the making of Russian grand strategy? However, Russian grand strategy is neither formally codified nor readily accessible, and it remains opaque at best. In this milieu, this project seeks to discern Russian grand strategy through the perceptions from within the Russian Military Industrial Complex (MIC), broadly defined as a domestic institutional configuration—an overlapping network of institutional appendages and individuals—that lies at the nexus of economic, military and political institutions. Predicated on that conceptual framework, the dissertation takes a neoclassical realist approach to pinpoint grand strategy across four cases of Russian military interventions abroad: Moldova (1992), Georgia (2008), Crimea (2014) and Syria (2015). This dissertation builds on Hal Brands’ conceptualization of grand strategy: “the theory, or logic, that guides leaders seeking security in a complex and insecure world.” Utilizing qualitative data analysis (QDA) and informed by personal and professional experiences in Russia, each case study follows a neoclassical realist model of causation with the explanatory variable tied to international systemic stimuli, mediated by leadership perceptions and domestic institutions, that shape the dependent variable—military intervention. The devil is always in the details, especially in a decision-making process as opaque as Russia’s. With a neoclassical realist lens, I therefore postulate that this causal chain operates via key intervening variables, one of which is the Russian MIC. Utilizing a proxy voice for the MIC, this dissertation provides a useful lens about the intervening process that gives rise to armed conflict from which we can then infer a Russian grand strategy based on cross-case commonalities and progression. In other words, Russian grand strategy through perceptions from within the Russian MIC. Overall, this study identifies the mainsprings of contemporary Russian grand strategy—military modernization and the formation of subjective narratives that empower the Kremlin to at times contradict international laws and norms, particularly in armed interventions, with the goal of securing long-term national sovereignty by orienting the international system towards multi- polarity. Informed by Braudel’s “longue durée” understanding of historical change, I call Russia’s grand strategy the “long nudge.” In this context, Russian state leaders slowly nudge the nation by shaping national memory in order to ensure military modernization and cultivate enduring domestic support—a national will—for (inevitable) state actions that require the use of force. The Kremlin also pursues international outcomes that nudge other states into accepting changes to rules and norms within the international system, but this nudging is not intended to overturn the system itself. This suggests that strategic patience—not aggressive revanchism or blind opportunism—underpins contemporary Russian grand strategy. Research findings indicate that each successful iteration of the use of force demonstrates Russian gains in relative power vis-à-vis the West, particularly the U.S., and thereby enhances Russian state prestige—the ability to make rules, shape norms and impose its will over others. Finally, observing that international structural conditions—the degree of systemic clarity and the permissive nature of the strategic environment—changed surrounding each case of military intervention, this dissertation also lends important context to Russia’s changing self-perception of power, with direct strategic, operational and tactical implications to policy makers tasked with countering Russian aggressive behavior.