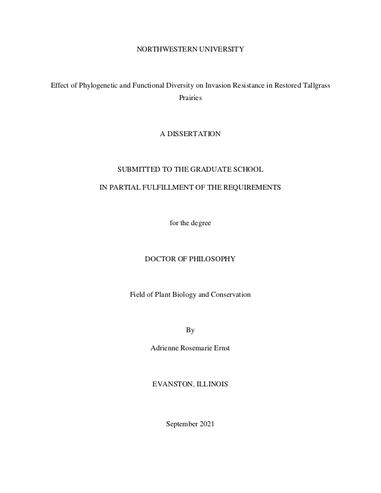 The question of how native species diversity affects a community’s ability to resist invasive species has inspired decades of research. One of the oldest invasion biology hypotheses is that more species rich ecosystems are less invaded. While there has been strong support for this hypothesis, there is also strong evidence of a contradictory trend wherein more species rich communities are more prone to invasion. This question has been explored thoroughly at different spatial scales, different ecosystems, time periods, and from both experimental and observational perspectives. However, this question has been predominantly explored with species richness—a measure of taxonomic diversity. In my dissertation, I set out to explore this question with two diversity metrics hypothesized to better represent niche-based processes: phylogenetic and functional diversity. As the relationship between diversity and invasion has been shown to vary depending on how it is studied, I explored how phylogenetic and functional diversity affected invasion through multiple lenses. In my first chapter, I used a dataset that tracked grassland sites across Illinois over a fifteen-year period. With this chapter I was able to demonstrate that more phylogenetically diverse sites were more invaded when I viewed that data from a static perspective, but that more phylogenetically diverse sites resisted invaders over time. My second and third chapter both take place within experimentally restored prairie plots with varied phylogenetic and functional diversity. Within this experiment were two smaller experiments, the same communities were established from seed and from plugs. The seed plots were managed more similarly to a restoration, while the plug plots were more intensively managed to control for the effects of the diversity. I conducted two invasion experiments in each of the plots mirroring their management differences, an observational invasion in the seed plots (Chapter 2) and an experimental invasion in the plug plots (Chapter 3). Chapter 2 followed invasion in the seed plots over three years, with invaders allowed to establish from the background, and characterized how the native plant community developed alongside the invaders. In these plots, I saw that more phylogenetically diverse communities had a higher abundance of invasive species. However, I also saw that the presence of a dominant clade at my site, the Asteraceae or sunflower family, coincided with both lowered invasion and lowered phylogenetic diversity. This suggests that early in a restoration, dominant native species may suppress both invaders and subordinate native species. For Chapter 3, I experimentally introduced three invader species into the more intensively maintained plug plots. The invaders were tracked over two years. For one of the invaders, I saw evidence that more phylogenetically diverse communities resisted invaders. In this chapter, by examining native functional traits individually, I was also able to demonstrate that there are multiple ecological strategies by which native species suppress invaders. Across all three chapters, I found evidence linking phylogenetic diversity to invasion, supporting the idea that a community’s evolutionary history meaningfully reflects ecological dynamics. I found a negative relationship between phylogenetic diversity and invasion over longer time scales: in the first chapter, this relationship was only apparent looking over time, and in the experimental prairie plots I only saw evidence of resistance in the more established communities started from plugs.