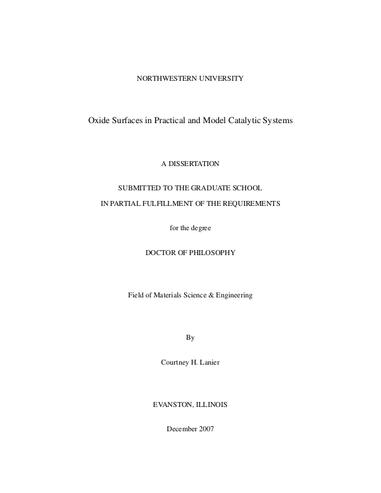 Oxide surface structures play a key role in many technological processes, including catalysis, thin film growth, and layered structures, and a thorough understanding of surface structures and surface structure dynamics is required in order to better engineer materials systems for these processes. This research works towards understanding these fundamental principles through an investigation of practical and model catalytic systems. In this work, the surface structures and dynamics of Mg3(VO4)2, LaAlO3, SrTiO3, and alpha-Fe2O3/Fe3O4 are investigated under a variety of conditions and by a range of experimental and computational techniques. The structure and morphology of LaAlO3 has been investigated over a range of annealing temperatures, and the (rt5 x rt5)R26.6o reconstruction of LaAlO3 (001) has been determined using transmission electron diffraction combined with direct methods. The structure is relatively simple, consisting of a lanthanum oxide termination with one lanthanum cation vacancy per surface unit cell. The electronic structure is unusual since a fractional number of holes or atomic occupancies per surface unit cell are required to achieve charge neutrality. The reconstruction can be understood in terms of expulsion of the more electropositive cation from the surface followed by an increased covalency between the remaining surface lanthanum atoms and adjacent oxygen atoms. The c(6x2) is a reconstruction of the SrTiO3 (001) surface that is formed between 1050-1100oC in oxidizing annealing conditions. This work proposes a model for the atomic structure for the c(6x2) obtained through a combination of results from transmission electron diffraction, surface x-ray diffraction, direct methods analysis, computational combinational screening, and density functional theory. As it is formed at high temperatures, the surface is complex and can be described as a short-range ordered phase featuring microscopic domains composed of four main structural motifs. Additionally, non-periodic TiO2 units are present on the surface. The surface and bulk of oriented single crystal Mg3(VO4)2 have been characterized after treatment in a reducing environment. Annealing in a flow of 7% H2 in N2 causes the reduction of Mg3(VO4)2 to Mg3V2O6, which is shown to be single-crystal to single-crystal and occurs in such a way that the oxygen framework of the crystal is preserved. Transmission electron microscopy images of crystals at the early stages of reduction show low angle grain boundaries and the formation of channels approximately 50nm in diameter. A model for reduction of Mg3(VO4)2 to Mg3V2O6 based on the experimental observations and derived from classic nucleation theory is proposed. The so-called Biphase structure on alpha-Fe2O3 has been previously reported and described as islands of Fe1-xO and alpha-Fe2O3 arranged in a 40 Angstrom periodic unit cell. Based on thermodynamic arguments and experimental evidence, including transmission electron diffraction, we find that the previous structure model was incorrect. Rather, it is found that the Biphase structure is, in fact, related to the reduction of alpha-Fe2O3 to Fe3O4, is a layered structure, and does not contain islands of Fe1-xO. A model for the Biphase termination consisting of bulk alpha-Fe2O3 with an Fe3O4 -derived overlayer is developed and is consistent with all current and previously reported experimental findings.