Exploring the Validity, Applications, and Accuracy of the P300-Based Concealed Information Test (CIT) 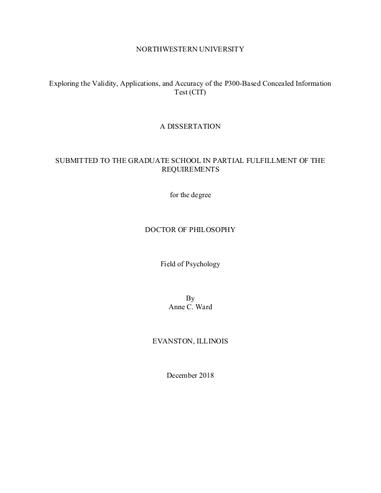 The concealed information test (CIT) has garnered more empirical support than other methods of recognition detection and has a firm theoretical foundation. Because it occurs involuntarily, even when recognition is denied, P300 amplitude is a robust indictor of concealed information. Although the P300-based CIT shows great promise for field use, there are outstanding questions regarding its validity, applications, and diagnostic accuracy. Thus, with the goal of refining the P300-based CIT for field use, the three experiments presented here aim to test: 1) the CIT’s resistance to countermeasures, 2) a novel test application, designed to detect specific details from general information, and 3) whether our diagnostic methods can be improved using machine learning (ML). In Experiment 1, we tested the impact of retroactive memory interference (RI) on the Complex Trial Protocol (CTP) version of the P300-based CIT. Because the CIT’s detection ability is based on recognition of key items, weakening the crime memory might decrease probe identifiability and reduce diagnostic power. RI research has shown that acquiring new information after encoding a memory can degrade the original memory, which suggests that RI might threaten the CIT’s accuracy. To test this, participants (Ps) completed a mock-crime, followed by either a control task or a RI manipulation task. Both the control and RI groups were subdivided into three time delay conditions: 1/3 of Ps immediately completed the task and CIT, another 1/3 completed the task and returned a week later for the CIT, and the remaining Ps completed both the task and CIT a week later. Results showed that, while the CIT effect (the probe-irrelevant difference upon which diagnosis is based) was obvious in all six group X time delay subconditions, its strength did not differ based on group or time delay, as was the case for target response error rates and P300 latencies. The only outcome of interest to vary by group or time delay was behavioral response times: both probe and Iall responses were delayed in the SG group. In Experiment 2, we explored the viability of the CTP when applied as a “searching” CIT (SCIT). In the field, investigators often have trouble extracting details from individuals known to be concealing information. Here, we explored the value of the CTP when used to narrow down from general to more specific information, using a mock-crime scenario. Ps randomized to a simple guilty group stole a piece of jewelry and then hid it inside a small container, located inside a larger container, while Ps in the innocent group completed a control task. All Ps then completed three SCIT blocks, the first testing for knowledge of the jewelry item, the second for knowledge of the large container, and the third testing for the small container in which the jewelry was ultimately hidden. Analyses were conducted in two ways first, comparing the known probe to irrelevant stimuli, and next, assuming that the largest P300 response belonged to the probe. Results showed that hit rates were high using the known probe (Block 1= 97%; Block 2=87%; Block 3=81%; Overall=84%), but not the “blind” probe (Block 2=42% Block 3=29%; Overall=68%) approach. In Experiment 3, we compare the accuracy of the bootstrapping method currently used to diagnose concealed information to an alternative ML method. Results showed the CIT effect in the guilty group but not the innocent group, and comparison of diagnostic methods revealed a seemingly higher hit rate (80% vs. 73%) and area under the curve (AUC) (.872 vs. .712) using bootstrapping compared to ML, although standardized z-scores did not provide evidence suggesting the superiority of one approach over the other (Z=1.06, p>.2, two-tailed). Across studies, hit rates were high when using our current methods, supporting the field readiness of the CTP. In Experiment 1, the RI manipulation did not threaten diagnostic accuracy, providing further evidence for the CTP’s countermeasure resistance. In Experiment 2, while our findings do not support that the SCIT was an effective tool for narrowing from general to specific details using traditional diagnostic methods, perfect discrimination between guilty and innocent groups was achieved by summing the number of bootstrapped iterations probe>irrelevants on known Block 1 and blind Blocks 2 and 3. In Experiment 3, results offered no evidence that the ML algorithm increased diagnostic accuracy of the CTP, and thus do not support that the ML method should replace the currently used bootstrapping method. Limitations and future directions are discussed, along with possible explanations for and consequences of our findings. Taken together, these studies address questions posed by the academic and the applied communities and provide evidence that further prepares the CTP for applied use.