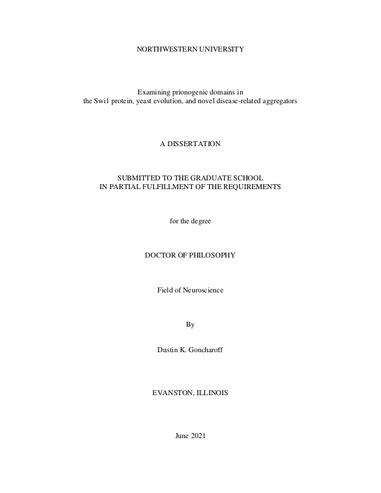 Prions are self-perpetuating, alternative protein conformations associated with neurological diseases and normal cellular functions. Saccharomyces cerevisiae contains many endogenous prions – providing a powerful system to study prionization. Previously, the Li Lab demonstrated that Swi1, a component of the SWI/SNF chromatin-remodeling complex, can form the prion [SWI+]. A small region, Swi11-38, with a unique amino-acid composition of low complexity, acts as a prion domain and supports [SWI+] propagation. Here, we further examine Swi11-38 through site-directed mutagenesis. We found that mutations of the two phenylalanine residues at positions 3 and 4 or the threonine tract at positions 15 to 22 inhibit Swi11-38 aggregation and prion propagation. In addition, mutating both phenylalanines can abolish de novo prion formation by Swi11-38 whereas mutating only one phenylalanine does not. Replacement of half or the entire eight-threonine tract with alanines has the same effect, possibly disrupting a core region of Swi11-38 aggregates. We also show that Swi11-38 and its prion-fold-maintaining mutants form high-molecular-weight, SDS-resistant aggregates whereas the double phenylalanine mutants eliminate these protein species. These results indicate the necessity of the large hydrophobic residues and threonine tract in Swi11-38 in prionogenesis – possibly acting as important aggregatable regions. Our findings thus highlight the importance of specific amino-acid residues in the Swi1 prion domain in prion formation and propagation. Given the multitude of endogenous yeast prions identified in S. cerevisiae, including the aforementioned Swi1, there remains an open question as to what is the evolutionary importance of these proteins and the prion domains contained within. A recent study sequenced over a thousand S. cerevisiae isolates from diverse geographic and ecologic origins. This data set has provided us the opportunity to probe the selection pressures that yeast prion proteins have undergone. Through comparison to S. paradoxus – the closest extant relative of S. cerevisiae, we have examined the rate of nonsynonymous (dN) and synonymous (dS) substitutions in yeast prion genes as well as several yeast prion-related genes including the FLO genes, which regulate yeast multicellularity and are regulated by a yeast prion network. In doing so, we have found an absence of evidence for correlation between the ecological origin of a yeast isolate and the observed selection pressures on both yeast prion genes and the FLO genes. However, there exists a divergent group of isolates undergoing strong selection pressure for FLO11. Most intriguingly, we find that yeast prion genes experience greater variation in their computed dN / dS values for their PrD-encoding regions as compared to their non-PrD-encoding regions. Additionally, the PrD portions of the genes are under purifying selection though the selection pressure is weaker than the non-PrD regions as viewed by the dN / dS ratio. Lastly, we examined predicted prionogenicity – as evaluated by the PLAAC and PAPA algorithms – as a stand-in for the functioning of the proteins that would be produced by the diverse alleles of yeast prion genes. General ecological origin did not correlate with changes in prionogenicity, and no strong correlations were seen in prionogenicity of different yeast prion proteins. In summary, although S. cerevisiae exists in a variety of ecological niches, the multiple yeast prion genes contained in the species are relatively maintained in their prionogenic potential but still undergoing relatively greater nonsynonymous changes in their PrD-encoding regions. Prion proteins also play an important role throughout other organisms including humans. Unfortunately, these proteins and related prion-like proteins underpin numerous incurable neurological diseases. Recent research has suggested a role for the prion phenomenon in cancers as p53 – which is widely mutated in cancers – can aggregate in a prion-like fashion that is also pathologically relevant. As such, we set out to use a bioinformatically-informed approach to identify novel protein aggregators involved in cancer. By using a combination of established prediction algorithms for prionogenicity, amyloidogenicity, disorderedness, and general aggregation propensity, we selected a group of top-ranked cancer-related proteins. From these proteins, we have found that several BAF complex proteins readily aggregate in a yeast model system. The BAF complex – also known as the human SWI/SNF complex – is highly mutated across virtually all cancer types and contains proteins functionally homologous to the yeast prion protein Swi1. Thus, the aggregation of these proteins in a yeast model may indicate possible disease-relevant aggregation is possible in humans as well. Furthermore, we identified that PrLDs contained in the clathrin interacting protein CLINT1 and in the circadian clock protein CLOCK can act as bona fide prion domains in a yeast assay. CLINT1 PrLD and CLOCK PrLD A – so termed due to the presence of two predicted PrLDs in CLOCK – both form monomeric, diffuse conformations in yeast as well as alternative conformations. These alternative conformations are stable and heritable and form high-molecular weight, SDS-resistant protein species. Given the important role that CLINT1 plays in vesicular trafficking and CLOCK plays in circadian rhythms and healthy homeostasis, aggregation driven by these PrLDs may possibly act as a foundation to human diseases including cancer, schizophrenia, and neurodegeneration.