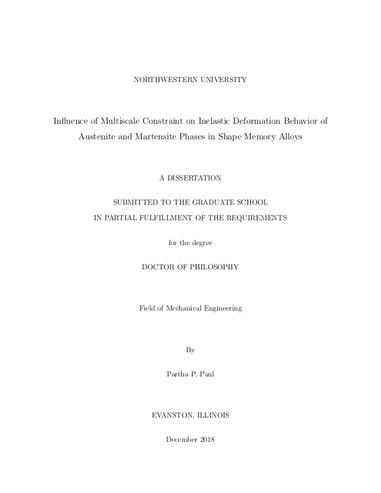 Deformation in materials with a hierarchical microstructure is expected to be complex because of the interaction between the units that form such a microstructure. The complexity of deformation would be even higher when additional inelastic deformation modes are active in such materials, apart from traditional elastic and plastic deformation modes. Shape memory alloys (SMAs) are a class of metallic materials that exhibit a nano- to macro-scale hierarchy in the microstructure. NiTi is the most common SMA, used in a variety of applications, from the biomedical industry as implants and stents, to the aerospace industry as actuators. NiTi shows remarkable properties such as ’superelasticity’, due to which the deformation is reversible, even up to ≈10% strain. This is possible due to a reversible phase transformation between a high and a low crystal symmetry phase. When this hierarchy in microstructure is combined with structural features, such as pores, cracks and notches the deformation picture becomes even more heterogeneous, rendering its characterization even more challenging. Each of these structural and microstructural features acts as a source of constraint, inducing heterogeneity in deformation in its vicinity. Various works in the past have addressed the effect of one or two dominant features, in inducing deformation heterogeneity. This includes structural features such as notches pores, cracks, as well as microstructural elements such as precipitates, phase boundaries, granular constraints from neighbors and brittle impurities embedded in a metallic matrix. This work investigates the interactions between various structural features(in the form of pores, notches and cracks), with the microstructure (in the form of grain, phase and twin boundaries), when multiple sources of constraint act simultaneously, across multiple length scales. Broadly, this interaction between structure and microstructure is divided into two halves. The first half studies such interactions primarily in the high symmetry austenite phase in NiTi while in the second half, such interactions are studied in the low symmetry martensite phase. In terms of characterization of the material in it’s high crystal symmetry phase, the response of the material is studied in the presence of microholes. The size of these pores with respect to the average microstructural length of the material is systematically varied to study the interactions between structure and microstructure. This is expanded to studying the growth of cracks in the vicinity of these holes, with the crystallographic constraints from the grains in the high symmetry phase, and it’s effect on the growth rate of cracks and propagation of failure. Finally, this competition between structure and microstructure is studied in micropillars, where the grain size is varied with respect to the pillar size. The suppression of deformation with a systematic change in the size of the grain with respect to the specimen size is examined in detail. In the second half of this work, the characterization is mainly done on the low crystal symmetry phase, martensite. The spatially heterogeneous evolution of a martensitic microstructure is examined in a notched specimen. This reveals a variety of inelastic mechanisms that act simultaneously, to result in a microstructure that continues evolving with increasing load in a heterogeneous manner till fracture. Finally, the heterogeneity in deformation around ternary phases and notches are examined in more detail, in terms of the inelastic mechanisms involved in the deformation and the extent of deformation on different domains lying in the vicinity of different sources of structural and microstructral constraint. A common theme running throughout this work is ’multiscale’. From the range of nanometers up to centimeters, various characterization techniques are used to probe the complex structure-microstructure interactions in materials with a hierarchical structure and microstructure. These include surface (2D) and volumetric (3D) based methods, in situ and ex situ methods and experimental and simulation based methods.