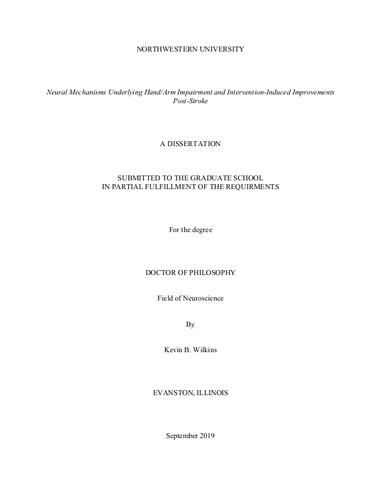 Individuals following a stroke suffer from a host of movement impairments that affect the upper extremity. Hand use is often significantly compromised, especially in individuals with more severe impairments, which makes it difficult for individuals to participate in activities of daily living. One of the major goals of rehabilitation is to understand the neural mechanisms underlying these impairments and then target them in order to improve hand and arm function. Unfortunately, many individuals with more severe impairments are typically excluded from traditional hand and arm therapy due to a lack of residual hand function. One reason for this observed difficulty in opening the hand is the loss of independent joint control. The most debilitating form of this for hand opening is the termed the ‘flexion synergy’, in which activation of the shoulder abductors, such as during lifting, leads to involuntary coactivation of elbow, wrist, and finger flexors. Consequently, hand opening ability, which is already impaired due to extensor weakness, is further exacerbated due to involuntary wrist/finger coactivation. Whereas weakness is thought to be due to damage to ipsilesional CST, this loss of independent joint control may be due to an increased compensatory reliance on uncrossed contralesional cortico-bulbospinal pathways that innervate the paretic arm but bias towards flexors and lack the resolution to individually activate muscles. The goal of this dissertation is to examine the neural mechanisms underlying the negative impact of lifting on hand opening ability in individuals post-stroke and any subsequent neural changes following participation in a device-assisted task-specific arm/hand intervention. We combined structural imaging of cortical gray matter, functional imaging related to the hand/arm, and robotics to uncover both the neural mechanisms of impairment and subsequent behavioral improvements following an intervention. We first investigated functional cortical activity changes for the hand in isolation compared to in conjunction with the shoulder in healthy individuals who do not display any negative impact of lifting on hand opening ability. We found that increasing the complexity of the task from a simple hand opening to a multi-joint hand opening while lifting led to an increase in cortico-cortico coupling between both the contralateral and ipsilateral hemisphere relative to the moving arm during the motor preparation phase, but that it did not alter the predominant reliance on contralateral motor cortices at movement execution. Meanwhile, for individuals with stroke, the addition of lifting during attempted hand opening led to an increase in activity in the ipsilateral (i.e., contralesional) hemisphere, specifically in ipsilateral secondary motor regions. This increased activity in ipsilateral secondary motor areas was associated with a decrease in hand opening ability, suggesting that a compensatory reliance on these regions (and their descending projections) may be detrimental to hand opening. Furthermore, individuals post-stroke showed a systemic increase in gray matter density in ipsilateral secondary motor areas compared to controls, implying a long-term compensatory reliance on these regions. Finally, we investigated the neural changes following a device-assisted task-specific hand arm intervention that improved hand function. Following the intervention, individuals displayed an increased reliance on the ipsilesional sensorimotor cortices for both hand opening in isolation and hand opening while lifting. This increased reliance included a reduction in contralesional primary sensorimotor cortex activity and an increase in ipsilesional primary sensorimotor cortex activity at movement execution. Furthermore, these changes at movement execution were accompanied by complementary changes in coupling during motor preparation, including a reduction in interhemispheric M1 coupling and a change in coupling within ipsilesional M1. In addition, individuals demonstrated structural changes in the sensorimotor cortex, including an increase in gray matter density in ipsilesional primary sensorimotor cortex and a decrease in contralesional primary sensorimotor cortex. This work demonstrates that the negative impact of lifting on hand opening may be at least partially attributed to an increased reliance on contralesional secondary motor areas. This fits within the framework proposing that compensatory use of contralesional cortico-bulbospinal tracts may result in the loss of independent joint control, since these tracts primarily originate from secondary motor areas. Furthermore, this work demonstrates that even individuals with severe motor impairments maintain the ability to reengage residual ipsilesional resources if engaged in an effective intervention. Considering the detrimental effect of the contralesional hemisphere on hand opening, reengaging the ipsilesional sensorimotor cortex appears crucial for any potential recovery of the hand.