Predictive Mechanisms of Placebo Analgesia in Chronic Back Pain Patients

Public Deposited
Add to collection
You do not have access to any existing collections. You may create a new collection. 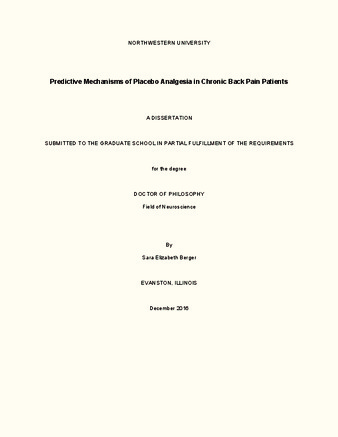 Chronic pain is a prevalent and under-treated condition that remains a mystery to the medical system and a major social and economic problem. Unfortunately, there is no single treatment superior to others for relieving chronic pain. While recent scientific discoveries have provided us with functional and anatomical brain biomarkers of persistence and recovery, as well as identified changes in emotional processing and behavior indicative of underlying neuroplasticity, we still do not understand why some patients respond to certain kinds of medications while others do not, nor have we fully captured the characteristics – physiological and psychological – that make someone with chronic pain likely to respond to a treatment now or in the future. The placebo effect - which describes a psychobiological response to an inactive or sham treatment - provides a unique framework under which to examine these questions and elucidate some of the mechanisms governing treatment response. The 3 studies presented here all use the setting of a randomized control trial (RCT) to investigate contributions of brain biomarkers, personality, memory, and semantic language properties in predisposing chronic low back pain patients to placebo response. The main aim of this dissertation is to identify neurological, psychosocial, and linguistic parameters that predict and/or significantly contribute to clinical placebo analgesia in chronic pain. In Study 1, resting state brain networks indicated that placebo responders and non-responders showed differential functional connectivity of lateral frontal regions with sensorimotor regions and the periaqueductal grey at baseline. Gray matter density, subcortical volumes, and cortical thickness also provided neuroanatomical pre-determinates of placebo response. Psychological profiling of patients using a battery of questionnaires indicated that placebo response in chronic pain patients depended on increased emotional awareness and decreased emotional suppression traits. This unique combination of imaging and personality variables dissociated responders from non-responders in a multivariate model and demonstrated that placebo analgesia in a clinical trial can be predicted from the functional circuitry of the lateral frontal cortex and key psychological characteristics of pain patients. In Study 2, we utilized quantitative language measures to better understand the placebo response in chronic low back pain. As part of the same RCT, we conducted a semi-structured, open-ended exit interview on all patients who finished the study. Using latent semantic analysis (LSA), we calculated the semantic similarity between each interview to 60 words of interest; 4 of these words explained over 68% of the variance in placebo response. 6 unique combinations of words significantly correlated to the brain measures and personality traits that predicted placebo propensity identified in Study 1, and when tested on their own, these language factors also identified novel functional connections corresponding to placebo analgesia. These results indicate that language can be used to identify psychosocial and neurological characteristics mediating placebo response propensity. Finally, in Study 3, we investigated the mismatch between daily pain experience and the memory of this experience, a phenomenon that could influence the placebo response or reported treatment efficacy. As part of the same RCT, we examined the discrepancy between experienced chronic low back pain intensity (from daily ratings recorded using a smartphone application) and self-reported memory of pain over the same time period. The cause of this discrepancy was studied relative to psychometric properties, morphology of the hippocampus, and personality traits. The majority of patients exaggerated their remembered pain, which depended on their strongest experienced pain and their most recent mood. This bias remained stable over 1 year and generalized to both reward memory bias and loss aversion. Shape displacement of the left posterior hippocampus mediated the effects of loss aversion personality on this pain memory bias. In two control groups, morphology of the posterior hippocampus was also stable over 1 year and unperturbed by the development of persistent pain. Importantly, a multi-parameter model accurately predicted pain memory bias in a validation group of patients. These results imply that hard-wired hippocampal learning circuitry and reward-related personality traits determine individuals’ exaggeration of their daily experience of pain. We conclude that (1) the propensity for clinical placebo analgesia in chronic low back pain can be predicted using a combination of personality traits, anatomical brain biomarkers, and functional brain connectivity, (2) language from patient narratives can be used as a surrogate for these predictive markers and as a tool in identifying them, and (3) pain memory bias is a clinically significant phenomenon predetermined by hippocampal morphometry and personality that must be accounted for in clinical trials using retrospective pain assessments.