Speaking of Science: The Role of the National Science Foundation in the Development of United States Information Infrastructure 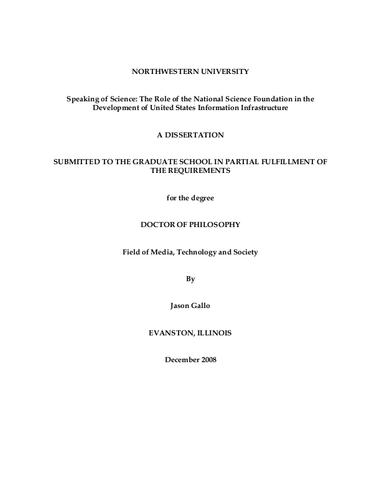 This dissertation argues that the National Science Foundation's role in, and influence on, the development of large scale scientific and technological systems, most notably improvements to U.S. information infrastructure, can best be understood through an examination of the NSF's institutional history. Because of the Foundation's weakened starting position at its founding in 1950, the cautious nature of its first director, Alan T. Waterman, and its broad mission "to advance the national health, prosperity, and welfare; to secure the national defense" through support for basic science, it has been forced to develop a strategy that ensures its continued survival among larger, older, and more powerful agencies competing for congressional appropriations. This strategy has two components: a discursive approach that situates Foundation support for basic research to the frontier rhetoric of Frederick Jackson Turner and Vannevar Bush and promotes the societal, economic, political, and security benefits of basic research utilizing a linear model of innovation. The NSF's operational strategy emphasizes the development of information and communications infrastructure, information management, virtual simulation, and at the most fundamental level, the generation of new scientific knowledge. This dissertation examines the influence of external and internal feedback upon the NSF. In response to these stimuli, the NSF has repeatedly utilized the frontier imagery of Frederick Jackson Turner and Vannevar Bush to justify its operations. This rhetoric has shaped the NSF's historic support for the virtual frontiers of science - satellites, information management and control systems, supercomputing, the NSFNET backbone, and the Network for Computational Nanotechnology. The NSF not only supports the opening of frontiers through building and supporting infrastructure, but also through grants to researchers and the training of scientific pioneers. By providing support at critical and overlapping stages and junctures of the frontier enterprise, the NSF simultaneously fulfills its mission and creates lasting infrastructural traces that establish sovereignty over space and enables the generation of fundamental knowledge that undergirds, at least rhetorically, the linear model of innovation that shapes post-war science and technology policy in the United States.