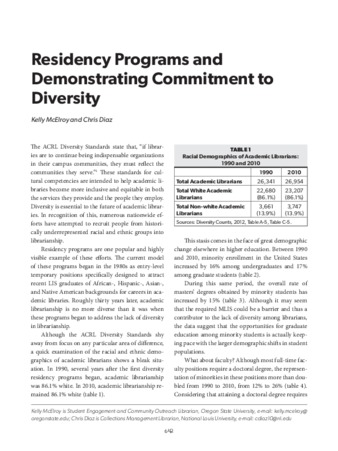 This paper was presented on March, 28, 2015, at the Association for College and Research Libraries Conference in Portland, Oregon. Slides are also available for download.

Post-graduate internships, residencies, and fellowships have existed in research libraries since the 1930s, and have increasingly become a diversity recruitment and retention method of college and university libraries since the 1980s. These programs recruit recent graduates from Library and Information Science programs for training and specialization in some aspect of academic and research librarianship, usually under a term-limited contract of one to three years, often with a stated goal of contributing to the diversity of the profession by recruiting candidates from historically underrepresented groups. Despite these longstanding efforts, the lack of racial and ethnic diversity in academic librarianship is stark. In 2010, non-white academic librarians represented less than 15% of credentialed librarians working in higher education (ALA Diversity Counts). In fact, this percentage is roughly the same as it was in 1990, ten years after residency programs first began addressing the lack of diversity in the profession. During this time, however, diversity among undergraduate students has increased by 15% in colleges and universities. Moreover, academic librarianship is less diverse than faculty membership in colleges and universities. Non-white faculty members represent more than 20% of full-time teaching positions in higher education (Digest of Education Statistics, 2012). While higher education is becoming more diverse, from students to professors, academic librarianship shows no noticeable movement. If residency programs are not fulfilling their mission of increasing diversity in the profession, what diversity-related function are they serving? We argue that there may be elements in the design, marketing, and administration of residency programs that are counter-productive to their diversity-focused goals. Historically, postgraduate positions in research libraries were created to address a critical gap between knowledge gained from Library and Information Science education and the specialized skills needed to work in research and academic libraries. What are the consequences of a hiring strategy for temporary positions that emphasizes professional development on persons from traditionally underrepresented groups (i.e. racial and ethnic minorities)? Qualitative research dating back to the late 1990’s shows residency participants reporting everything from subtle discrimination, such as patronizing attitudes from colleagues, to the more explicitly stigmatizing, such as the words “affirmative action”, “minority”, and “diversity” in the job title (Brewer, 1997). We believe there are better ways for academic libraries to demonstrate their commitment to diversity than simply administering these programs. This paper will offer a critical analysis of the diversity focus these programs take.