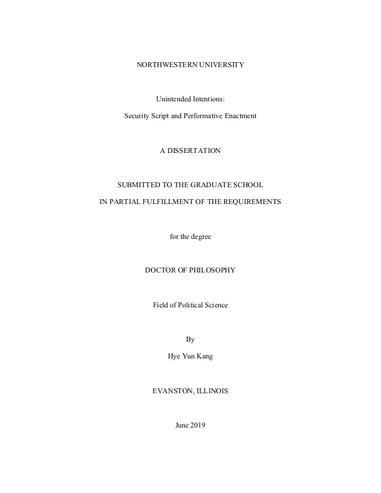 The term blowback originated from the American intelligence community to indicate the unexpected consequences of American foreign policy. In my dissertation, I give an account of how blowback results from these security policies. Blowback shows the cases that security policies create more harm than good to the enacting country due to military “accidents,” domestic repression, the militarization of policing, and terrorist attacks. But as I show in the dissertation, this phenomenon is not unique to the United States. My work reveals a universal aspect of security politics that apply to any country or any political community. This aspect, which I capture through the notion of “unintended consequences,” poses a great danger to the community members’ safety, wellbeing, and fundamental rights. The danger of blowback is not only in the damage resulting from the consequences. The damage to human lives, the destruction of military installations, economic resources, and demoralization rise to hurt the basic system of the country. September 11 epitomizes how this damage seeps deep into the social fabric. However, the bigger danger is the mechanism that creates blowback. Blowback indicates a pattern of crisis that implies its systematic source. In my dissertation, I regard blowback as a symptom that indicates this source of systematic danger. In order to show this mechanism of security, I draw on performance theory. My dissertation draws attention to the script that directs security action. I argue that the script of security invites an act of decision, or a performance as I call it, because of its inherent ambiguity. The ambiguity of security script is ineradicable so that it resists one “correct” interpretation. In understanding unintended consequences, the first attempt to find the intentions is often through searching for one final script. But there is no final script. The intentions of security actions are scripted in multiple policies and ordinances. Their narratives about enemy and threat are not coherent and are often conflicting. During the Korean War, the enemy is called a “communist,” but the narratives of who exactly is communist are not coherent. In military documents from the time, Korean peasants in rural areas appear as both communist sympathizers and innocent civilians. The plurality of scripts complicates the situation. But even if there is one final script for the action, ambiguity cannot be removed. In the case of Geochang, where the 5th operation order was the given script for the incident, this order’s text — “Execute everyone who is in the hands of the enemy”— still requires interpretations about the meaning of execution, enemy, “in the hands of the enemy,” etc. The interpretations resonate with subtexts of the suppression operation during the winter of 1950-1951, the U.S. Army’s Operation Roundup, and Washington’s foreign policy shift in the wake of Chinese intervention in the Korean War. The subtext also expands to include the unwritten text of cultural norms and social codes. During the McCarthy era, for example, the cultural understanding of “foreigner” greatly affected the interpretation of “enemy.” The fear of aliens and the resulting suppression is rooted deeper in the American history of immigration and the encounters with indigenous populations. In this sense, the script of security can include cultural knowledge in and around the issue of security. The existence of other scripts in the form of historical memory and cultural codes always informs a given script in multiple ways. These various documents and texts set out “intentions” in reaction to the concerns of threat, enemy, target, border, national interests, etc. The extent of subtext is endless, which constitutes the structural ambiguity of the script. At this point, it is difficult to say which one is the main script. These should be considered an alternate script of security rather than a subtext of the main text. This ambiguity of script invites the actor’s decision to enact in their own way. Thus, performance signifies the embodied behaviors of actors who interpret, understand, and enact the script. If there is no way to stop performing the script, no way to eradicate the ambiguity of the script, no way to fix the meaning of the script, blowback occurs sooner or later as a consequence of performance. To be sure, not every security action ends up causing physical damages historically. However, every single security action participates in the broader web of context that rewrites another script. The ambiguity of scripts creates systematic risks of blowback.