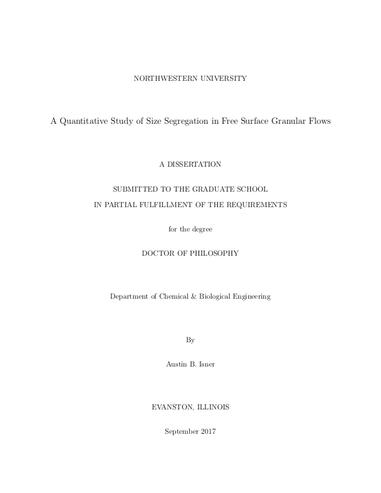 Granular solids consisting of various particle sizes exhibit the tendency to de-mix, or segregate, when caused to shear by external forces such as gravity. This well-known phenomenon is of special practical interest to many industries involved in the handling and transportation of bulk solids, where segregation can lead to adverse conditions for processing and quality control in various unit operations. A survey of the modern literature on segregation in granular materials yields a plenitude of qualitative and semi-quantitative methods for the prediction of segregation involving several granular flow configurations and particle types. Central to the challenge in modeling granular segregation is the lack of a generally applicable theory to accurately describe the kinematics in generic flowing geometries, as well as the lack of a first-principles based theory for describing size segregation in generic granular mixtures. However, in the past decade, continuum-based frameworks have re-emerged with the potential to quantitatively predict granular segregation when calibrated against a known velocity field, and supplied with material-dependent parameters describing local diffusion and particle-scale segregation. Hence, if the mean macroscopic velocity field can be found, either via experiments or simulations, the problem of describing segregation in an arbitrary geometry can be accurately modeled by means of an advection-diffusion equation, including a constitutive relation for particle segregation in the form of a drift flux. In practice, it is desired that the form of the segregation drift flux may be applicable to the broadest class of granular materials, with the fewest number of material-dependent parameters as possible. This research study is largely motivated from a practical standpoint to provide a foundation for the quantitative analysis and prediction of segregation in industrial granular heap flows. To achieve this goal, Discrete Element Method (DEM) simulations are used extensively throughout this work as a computational tool to help inform a macroscale constitutive model of segregation. The quasi-two-dimensional (quasi-2D) bounded heap is first used as a candidate geometry to study segregation in bidisperse mixtures consisting of two particle sizes. A scaling relationship for the segregation length scale is found as a function of absolute particle size and particle size ratio--control parameters which are independent from the flow geometry. The characteristic segregation length scaling is demonstrated to have wide applicability across different system geometries and their corresponding velocity fields. In the first instance, it is shown that the bidisperse segregation parameter can be extended to describe segregation in size multi-disperse and polydisperse systems, within reasonable constraints on the flow. In the second instance, the segregation constitutive equation is applied to the problem of axisymmetric conical heap flow. Using azimuthally periodic 3D DEM simulations, comprehensive results for the free surface kinematics in the axisymmetric heap geometry are revealed to display fundamentally different scaling behaviors than that in the quasi-2D geometry, leading to a prediction of overall less segregation in conical heap flows. DEM simulations are validated using a small-angle, wedge-shaped bounded heap apparatus by comparing segregation profiles and the velocity field as measured at the flow boundaries. In an effort to understand the range of validity of the bidisperse linear segregation sub-model, an earlier proposed segregation sub-model is re-visited. It is demonstrated that this precursory, nonlinear segregation sub-model is capable of capturing two recently observed, independent phenomena: 1.) asymmetric segregation rates for granular mixtures with unequal volume concentrations, and 2.) a non-monotonic size-ratio dependence of maximum segregation rate.