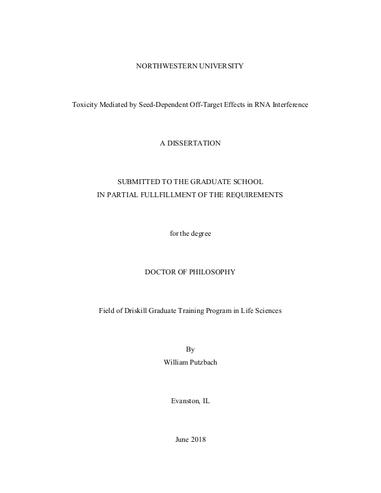 Post-transcriptional gene silencing (PTGS) and, more specifically, RNA interference (RNAi) include the processes by which a small double-stranded RNA, 19 to 22 nucleotides (nts) long, negatively regulates the expression and/or translatability of a target RNA, which harbors reverse complementarity to that small RNA, by recruiting the so-called RNA-Induced Silencing Complex (RISC). Scientists can “knock down” or deplete a specific RNA by introducing small interfering RNA (siRNA) duplexes that are fully complementarity to a region within the intended target. However, targeting can occur with complementarity of as little as six bps between an siRNA’s so-called seed sequence and a mRNA’s 3’ Untranslated Region (UTR). This seed-based targeting produces off-target effects (OTEs) in RNAi experiments, which result from unintended target RNAs, which harbor complementarity to the siRNA’s seed sequence, being downregulated. Whereas scientists can accurately predict the cellular effects of a specific and potent siRNA, provided the function of its intended target is understood, the phenotypic changes associated with seed-based OTEs (sOTEs) cannot be as easily predicted because these changes depend on the net outcome of a promiscuous six nt seed sequence that simultaneously, and to varying degrees of efficiency, targets up to hundreds of genes harboring, by chance, a compatible target site. Non-overlapping siRNAs that specifically and potently target the same gene would be predicted to evoke the same phenotypic change, provided the intended target performs an overt function. However, non-overlapping siRNAs with different seed sequences, even those designed to target a common gene, would also be predicted to evoke different sOTEs because of differences in off-target profiles. However, this presented work shows this is not always the case. Indeed, over 80% of commercially available siRNAs and short hairpin (sh)RNAs derived from CD95/CD95L mRNA sequences are toxic to cancer cells in the absence of the intended target site in these two genes, demonstrating this toxicity is independent of knocking down CD95 or CD95L and likely results from repression of other genes through seed-based targeting. This was confirmed by assessing the toxicity and functionality of chemically-modified and chimeric siRNAs. An shRNA lethality screen composed of every shRNA that can be derived from these two genes and an unrelated control gene, Venus, showed toxic sequences are enriched in certain regions including the Open Reading Frame (ORF) and the 3’ UTR of CD95L and CD95, respectively. These nonredundant CD95/CD95L-derived si/shRNAs all induce a novel form of cancer cell death, with distinct biochemical and morphological features best described as simultaneous activation of multiple death pathways. Interestingly, these toxic si/shRNAs, which do not share sequence homology in their seed regions, all preferentially downregulate mRNAs from the same cohort of survival genes, which initiates a unique sOTE coined Death Induced by Survival Gene Elimination (DISE). Toxicity positively correlates with the GC content of an siRNA’s seed sequence, and Dicer and Drosha knock-out cells display hypersensitivity. Together, these results reveal a subset of non-overlapping seed sequences embedded in the mRNAs of CD95 and CD95L that share certain characteristics and are highly toxic to cancer cells through the same sOTE mechanism of DISE. The abundance of toxic shRNA sequences derived from the CD95L ORF, as identified in the screen, suggested the full-length mRNA may exhibit functionality independent of its role in translating for CD95L protein. Indeed, expression of wild type (WT) CD95L and CD95L mutants that do not produce full-length apoptosis-inducing proteins are toxic to cells, even those harboring homozygous deletion of the CD95 gene. Global downregulation of survival genes occurs during overexpression—similar to DISE. Small RNA fragments derived from CD95L ORF mRNA associated with the RISC in cells overexpressing CD95L cDNA were also detected. These results show that expression of certain mRNAs, in this case CD95L, may produce small guide RNAs that evoke a specific cellular response through RNAi. The Peter lab is currently investigating how mRNAs (e.g. CD95/CD95L) may evoke DISE as a conserved cell-autonomous tumor surveillance system