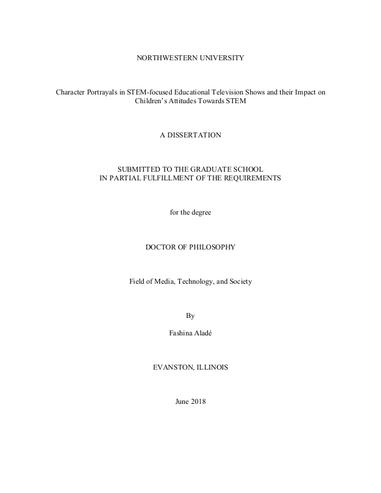 Developing an interest in science, technology, engineering, and mathematics (STEM) is an important precursor to pursuing a STEM career. Given the United States’ relatively low standings in science and math compared to similar industrialized nations and its desire to be competitive in an increasingly STEM-based global economy, policy makers are calling for more creative ways to encourage interest in STEM from a young age. In response to this call, there has been a recent surge in educational television shows that claim to support early STEM skills. While high-quality educational television can stimulate interest in topics that young children might not otherwise encounter (Fisch, 2004), the impact of STEM television programming on young children’s interest in STEM has not yet been empirically established. In the U.S., interest in STEM is especially low for female and minority children, which leads to less STEM participation for these groups later in life (National Science Board, 2010). These gender and race gaps are likely exacerbated by the mass media; content analyses reveal that characters engaging in math and science on TV are overwhelmingly male and White (Long, Boiarsky, & Thayer, 2001). Stereotypical portrayals not only impact the self-efficacy of girls and children of color, they also lead to society-wide beliefs about who can and should participate in STEM (Bandura, 1986b; Gerbner, 1998). However, there is potential for counter-stereotypical portrayals to counteract these traditional stereotypes (Aubrey & Harrison, 2004). Some educational television shows created in recent years have begun to feature more diverse characters, but the effect of these positive portrayals is yet unknown. The goals of this dissertation are to understand the current landscape of characters featured in STEM television for young children and to investigate whether children’s engagement with these programs can have a positive impact on their attitudes towards STEM. Study 1 presents a content analysis of 1,086 characters in 30 STEM-focused television shows for children ages 3-6 (three episodes per show, 90 episodes total). Results show that compared to the U.S. population, female and minority characters are underrepresented. Male characters are correspondingly overrepresented; however, White characters are not. This imbalance is caused by the inclusion of many racially ambiguous characters and characters with non-human skin colors. No significant differences by gender or race were found for characters’ on-screen STEM engagement or prominence in the show. Representation becomes more equal when looking only at child characters, suggesting that recent efforts to increase the diversity of character portrayals have been somewhat successful. Study 2 presents a pre/post, between-subjects experimental investigation of the effect of repeated exposure (8 weeks, 2-3 times per week) to a STEM television show that features a diverse group of highly STEM-engaged characters on children’s (N = 48, Mage = 6.57 years) attitudes towards STEM, gender and race-based occupational attitudes, and self-identification with STEM behaviors. Though no differences were found between treatment and control groups, several individual differences emerged as significant predictors of attitude change. Children who were more familiar with STEM television shows at pretest had less positive STEM attitudes at posttest, likely due to their greater consumption of more stereotypical programming. Children who had a greater understanding of the educational intent of the stimulus program and children who developed strong relationships with the stimulus characters experienced more positive STEM attitude change from pretest to posttest. Results of the two studies suggest that exposure to diverse portrayals of STEM occupations is important, and that today’s STEM television landscape does provide some diversity in terms of gender and race. However, results also suggest that one strong counter-stereotypical example may not be sufficient to change children’s worldviews about what types of people hold STEM careers. An overrepresentation of diverse, counter-stereotypical portrayals may be needed in order for children to believe that people of all genders and races belong in STEM.