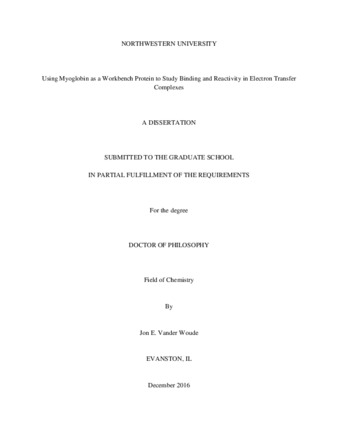 Interprotein electron transfer (ET) occupies a central role in both chemistry and biology, as it is important in a variety of functions including cellular respiration, metabolism, and energy transduction during photosynthesis. Consequently, understanding the protein-protein recognition and docking that controls interprotein ET is an important field of scientific research. One of the principal factors in this process is electrostatic attraction, and the nearlyneutral surface of the heme protein myoglobin (Mb) makes it an ideal ‘workbench’ to explore the significance of this factor. Wild type (WT) Mb forms weak and transient complexes with its partners where binding and reactivity are decoupled in a Dynamic Docking (DD) energy landscape. A few select charge-reversal mutations (D/E  K or KD/E) to Mb residues on the heme surface can be used to increase the electrostatic attraction between partners and optimize it for ET active binding conformations, shifting towards a Simple Docking (SD) landscape where binding and reactivity are coupled. Brownian Dynamics (BD) simulations have been used to re-work the Mb surface and optimize it to three protein partners: the negatively charged cytochrome b5 (b5), the positively charged cytochrome c (Cc), and Mb itself in a charge-disproportionation that created a 96% homologous dimer between two oppositely charged myoglobins. All three proteins showed significantly strengthened binding and ET reactivity with their protein partners as the electrostatic attraction between them increased, including shifting from DD to SD dynamics on the triplet timescale. Comparisons of the three complexes, however, revealed that binding and reactivity is controlled by more than electrostatic attraction. The [Mb(-6),Cc] complex has the strongest charge product (qp) of the protein complexes, yet displays the weakest binding and reactivity, which can partially be explained by a longer metal-metal distance in the ET partners. The [Mb(6),Mb(+6)] complex binds more strongly but is less reactive than the [Mb(+6),b5] complex, suggesting the two myoglobins do not bind in as favorable of a conformation for ET activity as the natural ET partners Mb and b5, and perhaps indicating that a true SD energy landscape has not yet been reached. Studies of the charge-separated intermediate on the triplet timescale for the [Mb(6),Mb(+6)] complex also showed unprecedented double-humped behavior, with a fast hump that remained unchanged as the viscosity increased. This behavior, which was not present in the comparable [Mb(-6),Cc] or [Mb(+6),b5] complexes, indicates that the [Mb(-6),Mb(+6)] complex undergoes true ET that is not controlled by gating (the need for the proteins to reach a reactive conformation). Further attempts were made to strengthen the binding and reactivity of the [Mb(-6),Mb(+6)] complex by making an additional mutation, this time to a neutral residue on the Mb(+6) heme surface. Kinetic studies of triplet quenching showed slightly increased binding and ET reactivity, while intermediate studies suggested the binding had slightly decreased. This again suggests that electrostatic attraction alone cannot explain the binding and reactivity of heme protein ET partners.