The Past Revisited: Popular Memory of the Cultural Revolution in Contemporary China 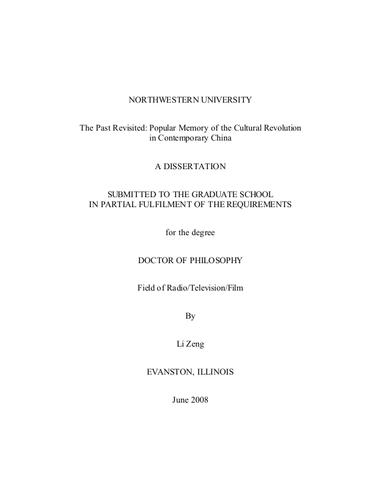 This dissertation explores the ways that Chinese popular media, including film, television, and magazines, reconstruct the Great Proletarian Cultural Revolution (1966-76), a traumatic historical event which tremendously affected Chinese people and society. Employing a combination of methods, including visual and narrative analysis of media and cultural forms, institutional analysis of media industries, and archival research on audiences'/readers' letters, it demonstrates that media and culture find innovative ways to engage this significant part of national history and to generate the remembrance and interpretation of the Cultural Revolution in public space. Rather than reducing the relation between official history and popular memory to a simplified dichotomy of power and resistance, this dissertation emphasizes an understanding of popular memories of the Cultural Revolution in a broader sociopolitical, economic, and cultural context. With a wide coverage of films and television serial dramas from the late 1970s to the turn of the new millennium, it shows how various factors, including the government's cultural policy, economic transformation, individual and generational concerns, as well as the cultural sentiment for reconstruction of gender and sexuality, have influenced and shaped the historical discourses at different moments. While affirming the significant role that popular media have played in keeping memories of the Cultural Revolution alive in public consciousness, this dissertation calls attention to the limitations and problems, such as the increasing sexist narratives and the problematic nostalgic sentiment for the era of the Cultural Revolution. This dissertation highlights the participation of audiences, viewers, and readers in engaging the memory of the Cultural Revolution. My archival research on audiences' responses to the Cultural Revolution-related films as well as readers' letters regarding the magazine, <em>Lao zaopian</em> (Old Photos), shows that ordinary people actively interpret this part of national history from their personal experiences, write their own histories, reveal hidden facts, or show support for such private memories. The general public constitutes a quintessential force, joining the cultural efforts to save the memory of the Cultural Revolution from fading into oblivion.