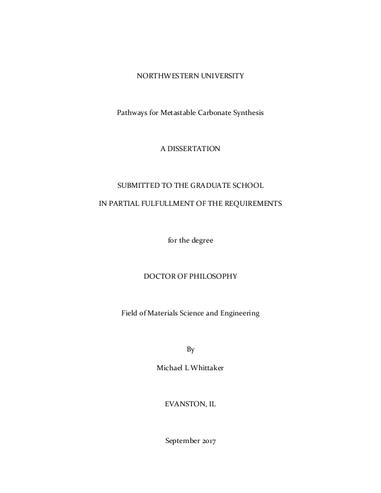 Carbonate minerals are integral to life on earth, as reservoirs for CO2 in the earth’s natural carbon cycle and as the skeletal elements of abundant organisms like corals and plankton. Because of its relevance, availability, and low toxicity, calcium carbonate is also an important model system for phase transformations in aqueous solutions. However, it often does not conform to classical theories of nucleation, prompting a critical reevaluation of both the pathways of carbonate mineralization and the theories that describe them. Most importantly, it has been shown that amorphous calcium carbonate (ACC) is frequently a precursor to crystalline calcium carbonate during precipitation, in both biological and inorganic systems. Amorphous precursors influence phase transformations in several ways, including decoupling densification of ions in solution from their arrangement on a crystalline lattice, altering solution thermodynamics, creating new interfaces, and changing kinetic barriers. To exert control over these processes in vivo, organisms generally confine precipitation reactions to small volumes, often within lipid membrane vesicles. Herein, I describe in vitro model systems designed to elucidate and replicate biological mineralization pathways. Giant unilamellar vesicles are shown to slow the rate of crystallization of ACC by excluding nucleation accelerants, and by preserving the high kinetic barriers to lower energy phases that result. Phosphatidylcholine, one of the most abundant natural lipids, does not interact strongly with ACC, but the interfacial chemistry canbe tuned by changing the lipid charge or reducing steric shielding. Microfluidically produced water-in-oil emulsions were used as liposome analogs to study crystallization kinetics. In ensembles of hundreds of emulsion drops, we show that vaterite forms from ACC via a classical, two-step nucleation process. We also extend the classical theory of nucleation to highly confined aqueous systems, where the formation of a nucleus changes the system composition. In systems chemically similar to ACC, amorphous strontium carbonate (ASC) is also observed in liposomes, but crystallizes rapidly, while amorphous barium carbonate (ABC) is not. We show that ACC can be made with over 50% barium, forming ACBC, but crystallizes at a dramatically faster rate with increasing barium. I demonstrate that this process dramatically departs from the classical description applied to ACC crystallization. It can be explained by the increasing short- and mid-range order in ACBC with increasing barium, which resembles that of crystalline Ca1-xBaxCO3 and selectively lowers the barrier to its formation relative to lower-energy structures. This Ca1- xBaxCO3 phase has been misidentified as calcite in the literature, but we solve the structure, assign the new spacegroup R-3m, and call it balcite. Balcite is only thermodynamically stable above 525°C, and is over 30% harder than calcite. In the absence of calcium, I show that ABC is a highly transient precursor to a previously uncharacterized BaCO3∙H2O phase. This phase forms as very thin (10 nm) and extremely anisotropic platelets, which themselves recrystallize rapidly into witherite (BaCO3). These examples demonstrate the power of amorphous precursors to enable metastable crystalline materials through thermodynamically downhill transformations, and the ability of confined volumes to reduce the rate of these transformations and enable their quantification.