Myth and the Modern Problem: Mythic Thinking in Twentieth-Century Britain 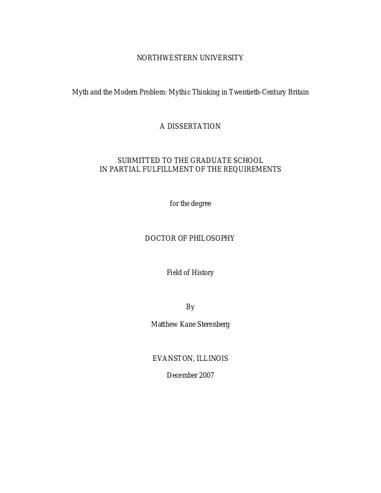 This dissertation, "Myth and the Modern Problem: Mythic Thinking in Twentieth-Century Britain," argues that a widespread phenomenon best described as "mythic thinking" emerged in the early twentieth century as way for a variety of thinkers and key cultural groups to frame and articulate their anxieties about, and their responses to, modernity. As such, can be understood in part as a response to what W.H. Auden described as "the modern problem": a vacuum of meaning caused by the absence of inherited presuppositions and metanarratives that imposed coherence on the flow of experience. At the same time, the dissertation contends that--paradoxically--mythic thinkers' response to, and critique of, modernity was itself a modern project insofar as it took place within, and depended upon, fundamental institutions, features, and tenets of modernity. Mythic thinking was defined by the belief that myths--timeless rather than time-bound explanatory narratives dealing with ultimate questions--were indispensable frameworks for interpreting experience, and essential tools for coping with and criticizing modernity. Throughout the period 1900 to 1980, it took the form of works of literature, art, philosophy, and theology designed to show that ancient myths had revelatory power for modern life, and that modernity sometimes required creation of new mythic narratives. Most fundamentally and most importantly, the dissertation demonstrates how mythic thinking constituted a new mode of making meaning that appealed to the imagination rather than reason by making the claim that myths communicate timeless truths that cannot be apprehended through reason or science. Myth therefore signified what its advocates found lacking in both modernity and in alternative responses to it: myth was rooted neither in the past nor the present but was timeless, it offered wisdom rather than knowledge, unity instead of fragmentation, order in place of chaos, spiritual solace instead of unbelief, and meaning rather than confusion. If, as Auden contended, the modern problem was at bottom about a vacuum of meaning, then mythic thinking--because it posited an entirely novel way of making meaning that broke with the past--was an audacious and unique twentieth-century attempt to fill that vacuum