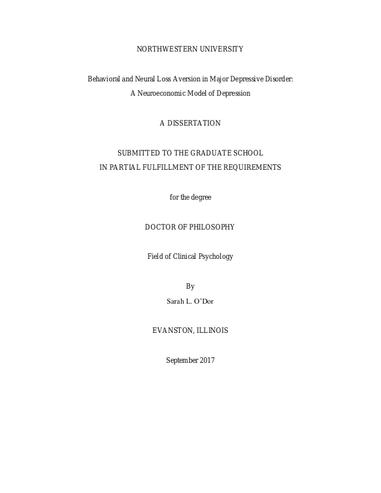 Background: Major Depressive Disorder (MDD) is a significant public health issue. Previous research on the pathophysiology of depression in adults has demonstrated abnormal neural processing associated with depression symptomatology including alterations in reward and aversion circuits. Loss aversion (LA), or the concept that individuals evaluate outcomes based on losses and gains and are more sensitive to losses than to gains, provides targets to identify neural correlates of the abnormal processing of losses and rewards among depressed patients. Thus far, behavioral and neurological characterizations of LA in depressed patients are poorly understood. Methodology/Principal Findings: Data for this project was derived from a large-scale project completed at Harvard Medical School/Massachusetts General Hospital. In the current study, we used model-based functional magnetic resonance imaging (fMRI) to investigate differences between patients with MDD and matched healthy controls with regard to: 1) behavioral LA, 2) brain activation to LA, and 3) the relationship between behavioral LA and neurological LA (i.e., neural differential sensitivity). Within a sample of 45 healthy controls and 29 patients with MDD, we found that a subset of individuals in each group exhibited atypical patterns of LA. More specifically, they consistently rated either positive values as negative or negative values as positive. Among those subjects with typical LA (n=32 controls and n=20 patients), healthy individuals trended towards higher evaluation of potential rewards than patients with MDD. While both healthy controls and depressed patients showed similar patterns of neural activation relative to subjective ratings of losses and gains, the healthy control group demonstrated neural activation in more regions than patients with MDD. Of the a priori regions examined (i.e., Nucleus Accumbens, (NAc), Ventral Tegmentum/Substantia Nigra (SN/VTA), and Amygdala), only the NAc and SN/VTA were involved in the relative evaluation of potential losses and gains, but these effects differed between groups. Controls demonstrated decreased activation in the R NAc to both positive and negative stimuli whereas the depressed group demonstrated decreased activation in the R and L NAc to only negative stimuli. Further, only healthy controls demonstrated increased activation to potential losses in the SN/VTA. Finally, association between behavioral LA and neural sensitivity was observed among controls only in the right orbitofrontal cortex (OFC) for the healthy control group but not individuals with MDD. Conclusion/Significance: These results raise the possibility that individuals with MDD, compared to healthy controls, may have a disruption in a reward/ aversion neural network. Specifically, in patients with MDD, disruptions in this network appear to manifest as decreased activation in the SN/VTA in response to negative stimuli and lack of involvement of the NAc in response to positive stimuli. Behaviorally, this may manifest as a decreased positive appraisal of potential gains in depressed patients relative to controls. Results also suggested that while behavioral and neural LA are correlated in the healthy controls in the right OFC, patients with MDD show a different pattern of interactions within the reward circuitry. This study highlights that depression may be understood using neuroeconomic models of behavior, including LA, to elucidate disrupted relationships between behaviors and neural processing of rewarding and aversive stimuli in patients with MDD. This may lead to the identification of biological substrates of depression symptomatology that can be targeted through behavioral and pharmacological interventions.