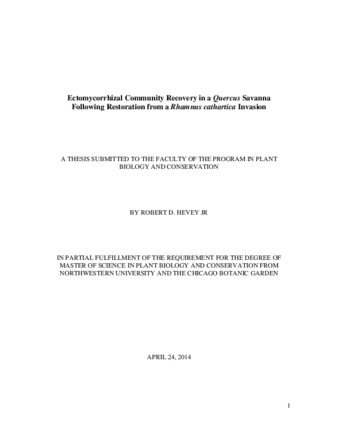 Once widespread throughout southern Wisconsin, Quercus savannas are now one of the most endangered communities due to fire suppression and increasing landscape fragmentation. These plant communities are also highly susceptible to invasions by nonnative, exotic species. Understanding the mechanisms of exotic species invasion has been the focus of numerous studies. However, few studies have documented ecosystem recovery following invasive species’ removal; even fewer have examined mycorrhizal community recovery. In this study, I examined the recovery of the ectomycorrhizal (ECM) community and changes in the soil factors carbon (C), nitrogen (N), and moisture over a three-year period following the removal of Rhamnus cathartica (buckthorn) in a Quercus macrocarpa (bur oak) savanna. I tested the hypotheses that the removal of the buckthorn would result in an increase in soil moisture and C/N ratio and would also result in an increase in species richness and diversity, and a modification in the community structure of the ECM community. Soil factors and the ECM community were monitored under the canopies of eight bur oaks; four trees were located in areas where buckthorn had been manually removed, while the remaining four trees were located in an area that was heavily invaded by buckthorn. Soil cores (448 total) were collected from eight bur oaks in fall 2009 and during the early summer and early fall over the following three consecutive years (2010, 2011, 2012). Soil N and C were determined by combustion analysis, and soil moisture by gravimetric methods. Sequencing of the internal transcribed spacer (ITS) region of the nuclear ribosomal DNA was used to identify ECM species colonizing Q. macrocarpa roots. Sequence data were used to provide measures of species richness and diversity, and ECM community structure was summarized and linked to soil factors using non-metric multidimensional scaling (NMDS). The soil analyses showed significant interannual and seasonal variations in soil moisture, and that soil moisture was higher in Cleared than Invaded areas. Similarly Soil C and N were significantly higher for the duration of the study however there was no significant time x treatment effect. In contrast, there was no significant difference in soil texture, available NO3, NH4, and P, and soil C/N ratio between Invaded and Cleared areas over time. More than 3200 ECM root tips were sorted into 82 morphological categories comprising 279 root tip samples for analysis. From this analysis 210 sequences were identified using a Basic Local Alignment Search Tool (BLAST) query of GenBank and UNITE databases. A total of 162 sequences were determined to be ECM of which 26 were identified as unique species of Ascomycota and 38 unique species of Basidiomycota. The ECM community showed a strong, positive response to Clearing. Species richness and diversity measures were significantly greater in the Cleared area (44 species) than the Invaded area (31 species). In addition, the ECM community in the Invaded area was dominated by three taxa (Scleroderma, Pachyphloeus, and members of the Pezizales) which accounted for 68% of the Invaded area root tips. In the Cleared area, the principal genera were Inocybe, Tuber, Cortinarius and Boletus (54% of the Cleared area root tips). Over the three-year period, only 11 ECM species occurred in both the Cleared and Invaded areas. The results of the NMDS analyses support these findings and show two distinct ECM communities: one associated with the Cleared area and one with the Invaded area. NMDS also indicated that ECM community structure was significantly influenced by soil C content (Cleared > Invaded). The results did not support the first hypothesis. Carbon, nitrogen, and soil moisture in the Cleared area were consistently higher than in the Invaded area throughout the study and while there were significant differences between Cleared and Invaded areas for all three soil factors over time, there was no significant difference over time x treatment. Analysis of ECM root tips collected from the Cleared and Invaded areas found distinct ECM communities between these areas, and indices of ECM richness and diversity were greater in the Cleared area than in the Invaded area supporting the second hypothesis of a favorable change in the Cleared ECM community. While this study did not find any obvious effect of the measured environmental variables (C, N, and moisture) it suggests that possible significant soil factors remain unmeasured since there was an identified difference in the communities between the Cleared and the Invaded areas.