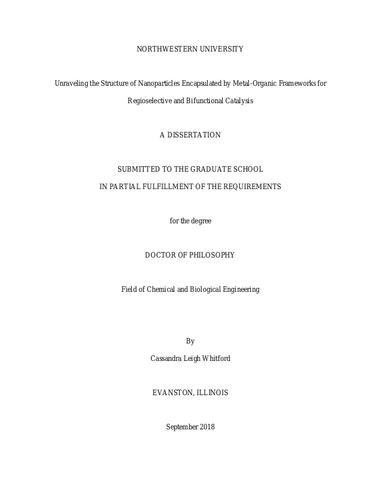 Composites of metal nanoparticles encapsulated by metal-organic frameworks (NP@MOFs) have recently emerged as intriguing heterogeneous catalysts for regioselective reactions. Sharing qualities of both zeolites and enzymes, these catalysts employ the pore system of a MOF to direct reactant access to the surface of nanoparticles. This dissertation seeks to better understand NP@MOF composites synthesized via controlled encapsulation through the characterization of an existing composite, the synthesis of a new composite, and the application of this new composite in various probe reactions.', 'The first part of this thesis focuses on characterizing the nanoparticle-MOF interface of Pt@ZIF-8. This NP@MOF composite is chosen as a probe catalyst due to its previous use in regioselective hydrogenation reactions. CO adsorption DRIFTS first reveals a striking difference between the available binding sites on Pt@ZIF-8 versus available sites on a supported metal control, PVP-covered nanoparticles on SBA-15. Redshifted linear and bridging CO adsorption sites on Pt@ZIF-8 suggest an electronic donation from ZIF-8 to the nanoparticle. This hypothesis is substantiated by 1H NMR, which confirms the binding of 2-methylimidazole to Pt nanoparticles. Knowing this, density functional theory calculations are used to compare CO adsorption on bare Pt(111) to CO adsorption on Pt(111) with an adjacently bound ZIF-8 linker, 2-methylimidazole. The magnitude of the calculated redshift is similar to that found using DRIFTS, and this study demonstrates the ability of 2-methylimidazole to donate electron density to a Pt surface. CO oxidation is performed in situ with DRIFTS to determine the active sites on Pt@ZIF-8. This work provides the first example of characterizing the nanoparticle surface within a MOF, improves the NP@MOF surface model for future studies, and validates the importance of applying established characterization techniques to novel catalysts.', 'The second part of this thesis comprises the synthesis, characterization, and reaction testing of Pd@UiO-66-NH2-25, a new NP@MOF synthesized via the controlled encapsulation method. The numerous trials to synthesize this composite are outlined to stress the specificity of this synthesis. The successfully synthesized composite is characterized using the techniques outlined in the Pt@ZIF-8 study. The intended goal of this synthesis is to establish a controlled encapsulation technique for a MOF with pores large enough to test cyclic reactants for regioselectivity, so furfural hydrogenation is thus chosen as a test reaction. While Pd@UiO-66-NH2-25 exhibits metal-catalyzed regioselective hydrogenation of furfural to furfuryl alcohol, the major product in this reaction is from an acid-catalyzed side route. Because of this, catalytic transfer hydrogenation of furfural is elected to directly test for Lewis acid catalytic ability. Pd@UiO-66-NH2-25 shows impressive activity for the reaction and produces furfuryl alcohol in high yields. To supplement this study, the acid sites of Pd@UiO-66-NH2-25 are quantified using potentiometric acid-base titration. Finally, as a probe reaction for bifunctionality, benzyl alcohol oxidative esterification is used to demonstrate both metal catalysis and acid catalysis in Pd@UiO-66-NH2-25. While the chosen reaction is less ideal than expected for this proof of concept study, bifunctionality is demonstrated through the making of methyl benzoate. As a whole, this study underlines the importance of characterizing both the encapsulated metal and the MOF in NP@MOF composites and shows the potential for using NP@MOF composites in tandem or one-pot reactions in the future. Overall, this work demonstrates that understanding MOF catalysts requires targeted characterization and carefully engineered reaction testing and that by combining these methods, the true potential for these materials in catalysis may be revealed.