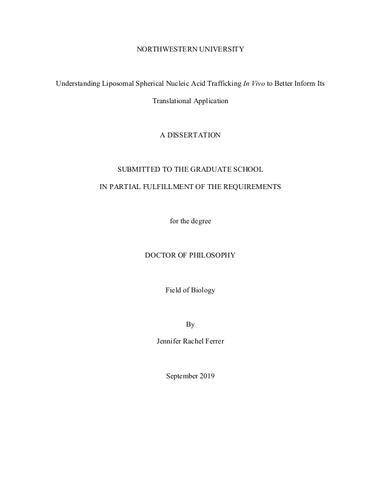 Spherical Nucleic Acids (SNAs) are unique class of nanomaterial characterized by a dense nucleic acid shell conjugated to a nanoparticle core. This radial orientation of oligonucleotides and architecture distinguishes SNAs from the components from which they are comprised. Specifically, unique chemical and biological properties emerge that are not observed with linear nucleic acids. For example, when complexed with complementary oligonucleotides, SNAs exhibit higher melting temperatures, a reflection of their higher affinities to such complements. In addition, despite being negatively charges, they are able to cross cellular membranes via receptor-mediated endocytosis. Importantly, these properties are a consequence of the dense nucleic acid shell and not the SNA core. These observations have led to the design and synthesis of a library of SNAs conjugates, which vary in size, core composition, and nucleic acid makeup. These unique biological properties have also contributed to the design and use of therapeutic SNAs for both gene regulation and immunomodulation. Most of the clinical trials using SNAs use the liposomal SNA (LSNAs), which is particularly attractive as both a therapeutic and drug delivery vehicle because of the modularity of both the liposome core as well as the conjugation chemistry used to create the nucleic acid shell. However, despite their current promise in Phase I trials, there has not yet been a fundamental study to examine how LSNAs behave in vivo. While there is some knowledge of how gold-based SNAs are trafficked once injected into mice, LSNAs are inherently less stable due to the fluidity of the liposome core as well as the hydrophobic interactions that are used to attach the DNA to the liposome core. It was thus hypothesized that chemical and biological factors would alter the trafficking of LSNA components in vivo, perhaps differing significantly from gold-based SNAs, and lead to clearer potential targets and inform how best to apply therapeutic LSNAs. This dissertation evaluates this hypothesis by examining the effects of: 1) architecture and DNA functionalization strategy, and 2) immune activation or suppression on the distribution of LSNA components in vivo. In Chapter Two, I looked at the effect of LSNA architecture and DNA attachment chemistry on the in vivo trafficking of nucleic acids. The results indicate that LSNA architecture does, in general, lead to higher accumulation of nucleic acids in most major organs, including the liver, spleen, lungs, and kidney. The results also show that the attachment moiety for DNA, a cholesterol or a full phospholipid tail, will alter biodistribution. Most notably, cholesterol LSNAs sequester to the lungs while lipid tail LSNAs lead to higher levels of DNA accumulation in the kidneys and brain. This difference in in vivo trafficking is likely due partly to the stability differences of these two LSNAs in the presence of biological fluids as well as the protein corona composition differences that may also be present. Chapter Three also examines the biodistribution of LSNAs but in the context of the immune system. By activating or suppressing the immune system of mice, the phenotype of the animals as well as the internal biological milieu can be altered. As a result of either immune activation or suppression, decreased trafficking of LSNAs to macrophage rich organs that normally would sequester nanoparticles (ie, liver, lungs, and spleen) was observed. However, due to decreased uptake by these organs, higher levels of LSNAs were found in other organs, such as the pancreas, lymph nodes, and brain, which normally show minimal LSNA uptake. Results also suggest that at the cellular level, differences in LSNA association may be due, in part, to a immune response difference for male versus female mice. Finally, in Chapter Four, therapeutic dual Toll-like receptor targeting LSNAs were synthesized and tested for efficacy in vitro using engineered reporter and primary mouse macrophage cells, as well as in vivo using a model of liver ischemia reperfusion injury and a model of lipopolysaccharide (LPS)-induced sepsis. This chapter shows how LSNAs can be used not only as sequence-specific antagonists for TLR9 but also as vehicles to enhance the delivery of a small molecule antagonist of TLR4 (TAK-242). Importantly, when a single entity SNA was used to co-deliver both TLR antagonists, it prophylactically inhibited sepsis onset and increased mouse survival despite having been given a lethal dose of LPS (TLR4 agonist). This result is surprising and profoundly remarkable given that the dose of TAK-242 administered within LSNAs was about three orders of magnitude lower than what the literature suggests is required to suppress LPS-induced sepsis. Taken together, the results of these thesis studies indicate that not only is the design of the LSNA important in predicting therapeutic efficacy, but the immune function of the animal model is an important consideration as well.