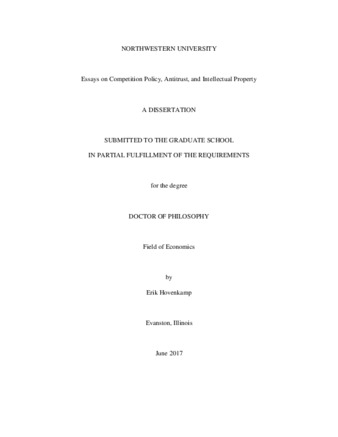 The patent system seeks to strike the ideal balance between competition and the rate of innovation – not to maximize innovation unconditionally. Clearly there must be limits on the manner and degree to which patents are used to diminish competition. A critical complication, however, is that this boundary is often obscure. As a matter of both economics and law, it is frequently very difficult to discern whether a given competition-suppressing practice is justified on patent policy grounds. In these cases, it is up to policymakers, economists, and jurists to discern what practices are likely to be efficient overall. To that end, this dissertation comprises four chapters on topics in competition policy, antitrust, and intellectual property, with emphasis on the intersection of antitrust and patent law. The Patent Trial and Appeal Board (PTAB) is an adjudicative division of the Patent Office that permits parties to challenge patents as invalid. In Chapter 1 (coauthored with Jorge Lemus), we investigate whether PTAB's distinctive institutional characteristics—such as its lack of antitrust jurisdiction or traditional justiciability requirements—may be exploited to facilitate potentially anticompetitive "reverse settlements" between drug monopolists and prospective generic competitors. We offer empirical evidence that most pharmaceutical settlements reached in PTAB appear to forestall market entry by the generic-petitioner, even if the disputed patent claims had been deemed “reasonably likely” to be invalidated. We also address the so-called “reverse patent troll” phenomenon – non-producing companies that use PTAB purely as a holdup device for extracting settlements. The practice has inspired widespread concern, but it appears to be rare. And we show that, for a number of reasons, it is not a particularly viable business model. Chapter 2 applies classical law and economics machinery – in particular Coasean economics – to the intersection of antitrust and intellectual property policy. Most influential economic theories about private disputes, including the Coase theorem, assume that there are no legal restraints on alienability, i.e. the transactability of rights and property. However, the parties to a patent dispute are often competing firms, and their private dealings may thus be constrained by the antitrust laws. Antitrust prohibits private transactions that allocate commercial rights in ways that unreasonably subvert competition between the parties. This creates an asymmetry between (1) the allocations of rights that the parties can effect through contract; and (2) those a court can effect through its judgment. For example, antitrust may condemn a “reverse payment” settlement in which a monopolist-patentee pays an accused infringer to stay off the market for several years. But if the dispute were litigated to judgment, a court could produce the same exclusionary outcome by issuing an injunction. The result is ultimately that, in contrast to familiar Coasean logic, a court’s delimitation of patent rights can influence the final allocation of such rights, even if the parties can bargain. Further, the parties may (rationally) litigate to judgment even if they have common beliefs about litigation, and even if they are perfectly capable of entering into a lawful settlement ex ante. The economics of these disputes is thus critically different from those usually studied in law and economics, and this leads to distinct normative conclusions, particularly with respect to the efficiency of settlement. Chapter 3 addresses a critical but often overlooked feature of the patent system, which is that it relies in part on markets to discern which inventions are patentable and which ones are not. Indeed, patent rights are not the only important legal entitlements conferred by the Patent Act. It also vests “challenge rights” in third parties, permitting them to challenge granted patents as invalid or uninfringed, and potentially clearing a path for privileged competition. These classes of rights perform opposite policy functions, with patent rights providing an inducement for invention and challenge rights providing a check against unwarranted or overbroad patent enforcement. And, unlike patent rights, the Patent Act never suggests that challenge rights are alienable – i.e. that they may be transacted or suppressed through contract. It follows that challenge restraints – contractual provisions that bar or penalize the exercise of a party’s challenge rights – are not within “the scope of the patent.” This suggests not that they are categorically unlawful, but simply that they do not enjoy safe harbor from antitrust attack. Challenge restraints are used within a variety of different patent agreements – ranging from ordinary licensing deals to “reverse settlements” – with varying competitive effects. However, the courts have failed to recognize challenge restraints as a distinct antitrust issue. This brief article explains why they ought to be viewed as such. The analysis also helps to clarify the proper ambit of antitrust intervention in patent agreements. Chapter 4 addresses strategic litigation tactics by “Patent Assertion Entities” (PAEs). These firms – pejoratively known as “patent trolls” – buy and assert patents, but do not actually produce anything that relies on them (and in many cases they don’t produce anything at all.) These firms frequently bring dubious infringement lawsuits on which they are very unlikely to net a profit. Although seemingly irrational, I argue this is a profitable strategy of “predatory patent litigation” in which a PAE monetizes bad patents by demonstrating a willingness to lose money on litigation. This gives the PAE a litigious reputation that persuades future targets to pay licensing demands they would ordinarily rebuff for lack of legal merit. I develop a novel recursive model of reputation building by a PAE, which is highly tractable and has interesting equilibrium dynamics. The unique equilibrium involves predatory litigation whenever litigation is sufficiently injurious for a defendant. I use the model to appraise some potential deterrence strategies. Fee shifting will improve matters, but is unlikely to deter PAEs from targeting small firms or startups. This article was heavily quoted by a recent Federal Trade Commission study on PAEs