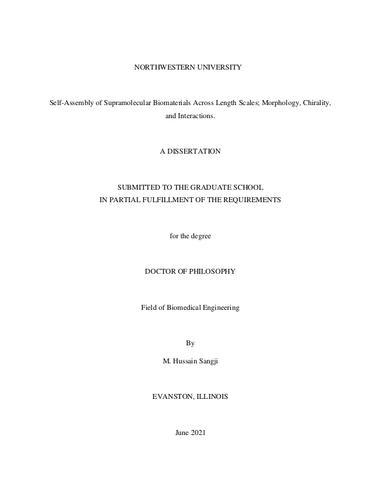 Soft materials in nature are formed through programmed self-assembly of biomolecules to create complex architectures and optimized physical properties. It is therefore a key challenge in biomaterials science and engineering to understand the principles that govern the structure and properties of such materials, and the interactions between their different components. This work explores the self-assembly of a class of biomimetic molecules, their supramolecular interactions within multi-component systems, and their physical properties across length scales. The materials studied here are Peptide Amphiphiles (PAs), which mimic the self-assembly of peptides and lipids in biological systems to create ordered nanostructures that resemble natural biopolymers. PAs can assemble into various shapes such as twisted ribbons, flat sheets, long cylinders, and micelles, based on the sequence of peptides in the molecule and the charge on the headgroup. High aspect ratio PA nanofibers form networks that can be used as cell scaffolds for regenerative medicine applications. In the first section of this dissertation, nano structures formed by a series of charged hydrophobic PAs were investigated using high resolution atomic force microscopy (AFM). These PAs self-assembled into twisted ribbons of different widths and periodicity. A correlation was observed between the width and pitch lengths of these nanostructures, and a self-assembly model was developed to explain the morphology of the nanostructures based on a balance between the energetically favorable packing of molecules in the center of the nanostructures, the unfavorable packing at the edges, and the deformations due to packing of twisted β-sheets. The morphological polydispersity of PA nanostructures was determined by peptides sequences, and the model indicated that this phenomenon is related to the twisting of their internal β-sheets. There was a change in the supramolecular chirality of the nanostructures as the peptide sequence was systematically modified, even though only amino acids with L configuration were used. The nanostructures switched from left-handed to right-handed twist as alanines in the sequence were replaced by larger and more hydrophobic valines. In addition, increasing the electrostatic charge on the assemblies changed their morphology from ribbons to cylinders, and then to micelles. Interestingly, a subpopulation of the nanostructures formed a DNA-like double helix structure with alternating major and minor grooves. A physical model was developed by combining known theories of chiral amphiphilic membranes and peptide twist, which established the key role of assembly stiffness in the formation of the double helix. As the stiffness of the assemblies increased, the ribbons become more asymmetric, and shifted towards forming double helices instead of twisted ribbons. When used as cellular scaffolds, the stiffness of these nanostructures also controlled the remodeling capacity of the material. Coatings of flexible fibers primarily deformed during cell spreading and migration, while coatings of rigid fibers primarily degraded. This effect was associated with the presence of more entanglements in flexible fiber networks, which stabilize the coatings. In the second section, multi-component systems of different PAs were investigated using combined fluorescence microscopy and AFM, and both uniformly mixed and self-sorted network architectures were found. The supramolecular organization of the individual components was found to control the final state of the mixtures, where the self-sorting was governed by the complementarity of hydrogen bond orientations in the molecules. This approach was used to study the co-assembly of protein-binding PAs, whose functional activities are known to be modified by the nanostructure. A new approach to create interpenetrating supramolecular networks with sequestered binding epitopes was developed using a combination of self-sorting and uniformly mixing bioactive components. In the third section, the physical properties of PAs were studied from the length scale of molecular organization up to the microscale dynamics of nanofiber networks. Modeling of diffraction patterns showed that the molecules within nanostructures are arranged in a rectangular lattice, and are tilted in the direction parallel to the hydrogen bonding. The persistence length of PA fibers, a measure of bending stiffness, was comparable to those of natural structural biopolymers like actin and collagen. PA fiber networks also exhibited glassy dynamics at the micron scale, like most fibrous components of the ECM, which supports their use as biomimetic scaffolds. The dynamics of the networks were sensitive to the stiffness of nanofibers only at high concentrations, where the collisions between fibers dominate the properties of the networks. Together, these studies provide a deeper understanding of the nanoarchitectures and physical properties of materials formed by self-assembling peptide-based biomolecules.