Autonomous Subthalamic Nucleus Activity in a Mouse Model of Parkinson's Disease: Mechanisms of Disruption and Consequences of Its Restoration 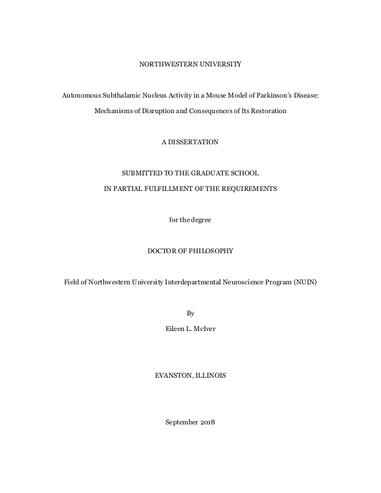 Parkinson's disease (PD) is a movement disorder that arises following the degeneration of dopamine-producing neurons of the substantia nigra pars compacta (SNc). Patients experience a host of limiting motor symptoms such as rigidity, tremor, and a paucity of controlled movement generation. These symptoms often correspond with a predominance of abnormally synchronous activity among neurons in the cortico-basal ganglia-thalamo-cortical loop, which moderates limbic, associative, and motor processes. This thesis focuses on the electrophysiological activity of one basal ganglia component, the subthalamic nucleus (STN), and how it changes in mouse models of PD, with the aim of targeting its pathological behavior for therapeutic intervention. Herein, a combination of ex vivo electrophysiology, 2-photon imaging, optogenetics, chemogenetics, immunohistochemistry, and behavioral assays were employed to elucidate the circuit triggers, cellular mechanisms, and therapeutic targeting potential of aberrant STN activity.The STN is situated at an intersection of excitatory and inhibitory inputs where it integrates incoming signals from the cortico-basal ganglia-thalamo-cortical loop and excites the circuit's output structures. This synaptic integration is influenced by the timing of autonomously-generated action potentials that are produced rhythmically and continuously by STN neurons at rates typically between 5 and 20 Hz in the mouse, thus rendering the influence of synaptic input dependent on the neurons' recent intrinsic firing history. Several models of experimental PD exhibit a complete loss or a severe reduction in the frequency and regularity of autonomous firing in STN neurons during ex vivo electrophysiological recordings, including the acute 6-hydroxydopamine (6-OHDA) toxin lesion and the progressive genetic MitoPark mouse models tested in this study. While dopaminergic input from the SNc can modulate STN activity, its loss is not the cause of the parkinsonian firing phenotype because in dopamine-intact mice, chronic chemogenetic activation of D2 dopamine receptor-expressing striatal projection neurons (D2-SPNs, whose output is elevated in PD) is sufficient to reproduce the STN firing perturbation of the 6-OHDA model (in which the effect is occluded). The result of augmented D2-SPN inhibition of the inhibitory external segment of the globus pallidus (GPe) is in turn a disinhibition of the downstream STN. Periodic GPe-STN inhibition is phase-offset with excitatory cortical excitation in the synchronously-oscillating parkinsonian brain, which generates greater activation of NMDA receptors (Rs) in STN neurons and elevated calcium influx through them. Indeed, autonomous STN activity was disrupted in dopamine-intact mice by ex vivo activation of NMDARs for 1 hr, but this effect was occluded in PD mice. Furthermore, knockdown of STN-NMDARs in PD mice prevented the loss of rhythmic autonomous firing after dopamine depletion. Altogether these results indicate that 1) elevated D2-SPN output that disinhibits the STN is responsible for triggering the firing perturbation in PD mice, and 2) STN NMDAR activation is both necessary and sufficient to produce the downregulation of intrinsic activity in PD mice.Maintaining a hyperpolarized membrane potential is a metabolically costly endeavor, particularly in an autonomously firing and/or prolifically stimulated neuron. With additional Ca2+ influx through NMDARs comes the production of reactive oxygen species (ROS) in mitochondria that can engage intracellular signaling pathways and trigger metabolic adaptations to the neuron's electrochemical environment. In line with this theory, mitochondrial oxidation in STN neurons was elevated in 6-OHDA-treated mice, and acute breakdown of the ROS H2O2 ex vivo rescued autonomous firing, implying ROS generation in the STN may be translating NMDAR activation into a suppression of neuronal excitability. STN NMDAR stimulation has been shown to activate the ATP-sensitive K+ (KATP) channel, which hyperpolarizes the membrane and reduces intrinsic firing. H2O2 has also been shown to activate these channels, and indeed blocking KATP channels ex vivo restored intrinsic firing and occluded the rescue by H2O2 breakdown. These results argue that elevated STN NMDAR activation and Ca2+ influx leads to increased production of ROS and H2O2-mediated activation of the KATP channel, which downregulates autonomous activity.Finally, STN neurons were chemogenetically activated to restore intrinsic excitability in PD mice. Ex vivo, chemogenetic STN activation in 6-OHDA-lesioned mice diminished the synaptic drive from optogenetically stimulated motor cortical inputs to the STN, an indication that normalized autonomous firing reduces the STN's propagation of incoming synchronous oscillatory activity. As abnormally synchronous activity corresponds with symptoms of PD, its reduction by restoring autonomous STN activity was predicted to ameliorate motor deficits in these mice. Indeed, chemogenetic activation of the STN reduced forelimb use asymmetry in the unilateral 6-OHDA mouse model. Thus, despite appearances that downregulation of STN activity in response to elevated NMDAR activation would be adaptive to resist excitotoxicity, an individual neuron's response to its immediate environment (e.g. energy availability and synaptic input) cannot take into account the entire circuit's interactions and output. This thesis argues the STN's reduction of intrinsic firing is ultimately maladaptive in the context of the parkinsonian brain, and its correction is therapeutic. This study therefore contributes to the PD field's understanding of pathophysiology in the STN following dopamine loss and suggests a novel therapeutic intervention to treat motor symptoms of the disease."]