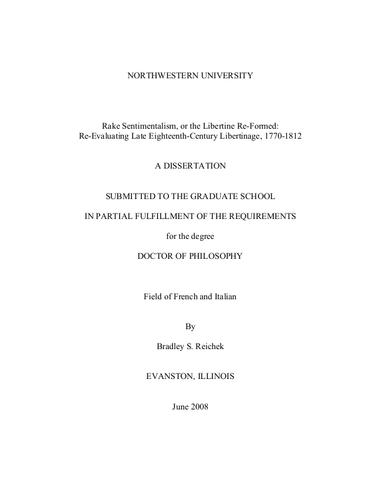 This dissertation constitutes a re-evaluation of the popular and critical understanding of eighteenth-century libertinage. In particular, I contest the distinction between sentimentalism and libertinage, which are typically seen as two, irreconcilable approaches to emotional expression. As sentimentalism became prominent in the second half of the eighteenth century, I argue, it came to inflect libertine texts and archetypes. My project, thus, examines libertine texts through the lenses of sentiment, reflection, moderation, and consideration. I begin the dissertation with a discussion of Giacomo Casanova's memoirs, "Histoire de ma vie," and show how they may be seen as an expression of what I call libertine sentimentalism. In particular, I look at how Casanova constructs an emotional fidelity to the many women he loved through memory. In Chapter 3, I analyze La Mettrie's sensualist essay, "La Volupté," and Mirabeau's erotic novel, "Le Rideau levé." Both deal with the epistemology of libertinage, that is, the physical and mental development and refinement that is required to gain access to the highest forms of libertine pleasure (and thus become the ideal lover). Moderation, taste, and an attention to the pleasure of one's partner are held up as ideals as opposed to the coarse, narcissistic, and violent pleasures of the debauched. Chapter 4 synthesizes the ideas presented in the previous two chapters. I read Vivant Denon's novella "Point de lendemain" as a narrative about the young male protagonist's sentimental education over the course of a nuit merveilleuse, one that teaches him to be tender, delicate, and sensitive with his mistress. I end the dissertation with an exploration of how libertinage has been memorialized and misunderstood within modern French popular culture. I take as case studies two re-writings of Point de lendemain (Balzac's "Physiologie du mariage" and Milan Kundera's "La Lenteur") and two contemporary films (Gabriel Aghion's "Le Libertin" and Jean-Claude Brisseau's "Choses secrètes"). These works, I contend, nostalgically draw upon (and perpetuate) the libertine past but do so by evacuating sentiment and equating libertinage with sexual liberation and sex without attachment. In doing so, I suggest, these works fundamentally misrepresent the complexity and diversity of eighteenth-century libertinage.