Breathing the Freedom's Air": The African American Struggle for Equal Citizenship in Iowa, 1830-1900 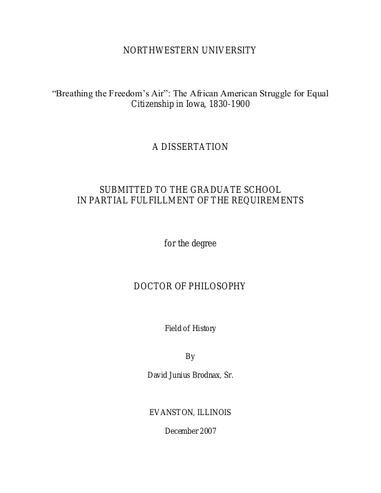 This dissertation explores a seventy-year period of community growth and activism among African Americans in nineteenth-century Iowa, showing how citizenship was defined, contested, expanded and confined. Antebellum black migrants lived on the margins of a hostile society and struggled for equal citizenship using their labor, their community institutions, the legal system, and the forum of public discourse. This sometimes meant forming client-patron relations with powerful whites, while at other times it focused on a rights-based appeal. On the eve of the Civil War, though, Iowa's racial dynamics remained fundamentally unchanged. The war, however, brought new opportunities through migration and military service. African Americans used their wartime loyalty as political capital and integrated the ballot box and the schoolroom, although most blacks remained confined to menial jobs, while their still-small numbers prevented the election of black officials. Iowa's black communities continued to grow in later years, and community activists employed the traditional tactics through lawsuits, petitions, public celebrations, and other venues. Finally, a sea change occurred in the 1890s. Community leadership was assumed by a younger generation that had grown up free in Iowa after the war, attended integrated schools, and sought to address more contemporary problems while still honoring the past. Despite increasing racial hostility in Iowa and nationally, African Americans achieved two milestone institutional victories with the state's first black elected officials and viable black newspaper. Finally, in 1900 the mining town of Buxton was established, creating a thriving environment that had a black majority in this still overwhelmingly white state. Although this story is largely unknown in the historiography, this work does not simply seek to tell a story that has never been told before. Using social, political, and legal methodology and primary sources, it reveals useful insights about race, gender, class, family and black visions of citizenship in the nineteenth-century Midwest. It shows how African Americans innovatively engaged in politics by other means. And it confronts the common assumption that blacks were not capable of creating social change or protecting their rights in states where they lived in small numbers.