The non-canonical roles of histamine in immunological processes 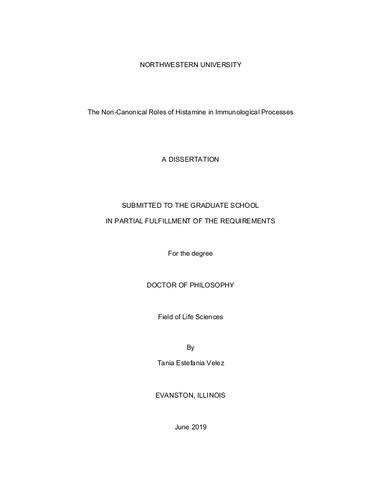 Histamine is a well-known potent mediator during the elicitation of IgE-mediated allergic diseases. The most robust, and potentially fatal, response of histamine is observed in patients with food allergy that undergo IgE-mediated anaphylaxis. The key mechanisms of the biology of histamine in allergic disease are well-established, however there are still gaps in the knowledge of how histamine is regulating the allergic response. We investigated two different aspects of histamine biology: the first was focused on the kinetics of histamine during anaphylaxis and how histamine potentiates a prolonged response, and the second was to determine how newly identified histamine responding cells regulate antibody production in allergic disease. We designed our studies to specifically understand how histamine metabolites influence histamine-driven biology, and the role for histamine in regulating B cell antibody production. Histamine is rapidly release during anaphylaxis and initiates responses primarily through histamine receptors 1 and 2. In the circulation histamine is quickly metabolized, with a half-life of about 1-2 minutes. Yet, antihistamines are effective at alleviating remaining symptoms hours after the initial response. This suggests that there is an unknown mechanism that promotes histamine-driven responses long after its degradation. We identified a histamine metabolite, imidazole acetic acid (IAA), that perpetuates histamine-driven inflammation by inducing histamine release from mast cells. We found that IAA does not bind to the histamine receptors itself, but instead IAA may be mediating its effects through an imidazole receptor, Nischarin. Interestingly however, in the absence of Nischarin from all cells resulted in heightened IAA-driven anaphylaxis, which suggests that IAA must mediate its effects on anaphylaxis through another, unidentified receptor. Together, these data demonstrated for the first time that IAA pays an important role during anaphylaxis by potentiating histamine release. Although Nischarin was not the receptor mediating these effects, our results suggest that Nischarin is a potential suppressor for anaphylaxis. Histamine receptors themselves are known to be expressed on cells that are important for the development of allergic disease, such as T cells, dendritic cells (DC), and B cells. Yet, the effects of histamine on these cells, especially during sensitization, have not been well characterized. Previous studies have shown that histamine receptor knock-out (KO) mice produce fewer antibodies in models of allergic air-way inflammation, however, it is not clear how histamine is regulating antibody production, nor whether histamine has any direct effects on B cells. In our studies, we found that both receptors were necessary for production of IgE and antigen-specific antibody responses in a model of allergic-airway hypersensitivity. In addition, we saw that histamine was necessary for the development of IgE+ cells in the draining lymph nodes. Importantly, we also determined that histamine receptors 1 and 2 were necessary on both B and T cells for induction of IgE responses in vivo. We were able to characterize differential gene expression signatures in B cells and T cells lacking histamine receptors 1 and 2 compared to WT cells using RNA sequencing, and these signatures were characterized by defects in the expression of genes involved in pathways associated with cellular stress responses as well as other B cell regulatory pathways. Collectively, this work has identified and characterized novel roles for histamine in allergic responses. We identified a mechanism whereby histamine can potentiate its own response through one of its metabolites and a role for histamine in regulating antibody responses. These findings highlight the non-canonical roles that histamine may play in the development of allergic disease, and may provide insights into the identification of targets for the development of improve therapeutics for the treatment of these diseases.