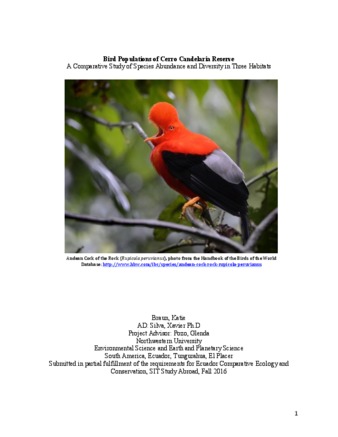 This study analyzed the differences between three habitats in and around EcoMinga’s Cerro Candelaria Reserve, which protects part of the Llanganates – Sangay Ecological Corridor in the eastern cloud forest of Ecuador. The EcoMinga Foundation began reforestation efforts in several abandoned pastures in the reserve in 2008, which have since been the focus of several forestry studies to determine the success of the reforestation effort. One aim of this study was to continue the analysis of the reforestation project through the use of avifaunal communities. Three 1,500 meter transects were set up along the main trails, with one transect in each of the study sites. The point count method was used to observe and identify the birds seen both during morning and afternoon periods. The time spent observing at point counts totaled 27.3 hours, during which 506 individuals were observed, 306 were identified to the species level, and 51 species were identified in 25 different families. Chi-square tests confirmed that there was a statistically significant correlation between the study site and dietary guild, study site and migration pattern, and study site and foraging strata on the individual level, but not on the species level. Species richness, the Chao lower bound estimate of species richness, and the exponential Shannon entropy all found that the riparian site had the highest diversity, and the primary forest had the lowest diversity. Limitations on the observer’s ability to identify surely skewed these results. Species abundance curves and sample coverage show that the avifaunal survey was not close to representative of the total avifaunal communities in the sites, so further study is recommended, especially focusing on the reforestation and primary forest sites, to determine the total population makeup and comparative diversities.

This project would not have been possible without the support and kindness of the El Placer community. Thanks to Piedad Recalde for her constant care, humor, and enormous amounts of delicious food. Thanks to Jesús Recalde and Darwin Recalde for their companionship in the field and invaluable insights on the reserve, its history, and bird identification. Outside of the El Placer community, Glenda Pozo, Xavier Silva, and Javier Robayo provided advice on the structure and methodology of this project. Juan Pablo Reyes Puig and the members of the Fundación Oscar Efrén Reyes provided logistical support. Finally, thanks to Anya Krause, Katie Weigel, and the rest of the SIT community for so many fun memories.