The Rocket’s Red Glare: Global Power and the Rise of American State Technology, 1940-1960 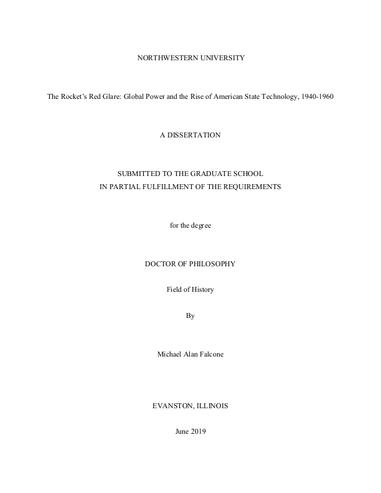 This dissertation, titled “The Rocket’s Red Glare: Global Power and the Rise of American State Technology, 1940-1960,” makes three distinct but interlocking historical interventions. First, it argues that the rise of technology as a central ideological component of global hegemony represents a historical contingency, rather than a reflexive characteristic of great power status. Second, it argues that the United States lagged significantly behind other powers in pursuing state science and technology for much of the industrial era—rather, it was the technological, bureaucratic, and doctrinal tutelage of Great Britain during the Second World War that finally coaxed the American state into pursuing what would eventually become known as the military-industrial complex. Finally, it argues that U.S. inclination toward global hegemony was neither ‘present at the creation’ nor a reluctant assumption of responsibility in the aftermath of war, but rather represented a conscious doctrinal pivot, one informed in large part by the technological changes of the war. The British, eager to prop up their ally, had desperately thrust a number of key innovations into the uncertain hands of the American state, among them radar, jet engines, antibiotics, and the seeds of nuclear weaponry. They had also pressed their American partners to erect new institutions to accommodate further state research into technology—institutions that were previously wholly lacking in the United States. To a surprising degree, then, the military-industrial complex that defined the postwar American landscape represented a foreign import. The dissertation’s chapters follow this theme through the aftermath of Sputnik in 1957, documenting the rocky implantation of a technological vision of global hegemony into an ill-prepared American state, with the military ending up as the only organization at political liberty to realize the vision of a scientific ‘Endless Frontier.’ The way this ideology of hegemony became reified among American thinkers, policymakers, and the public sphere, as well as its projection abroad by the 1960s, came to redefine the pursuit of power among industrialized nations and blocs the world over, from the EEC to the PRC. As the project ultimately reveals, however, powerful nations’ current commitments to science and technology are in fact contingent products of a chaotic historical moment, rather than a natural outgrowth of states’ will to power.