Synthesis and Characterization of Hybrid Organic-Inorganic Structures for Photovoltaic Devices

Public Deposited
Add to collection
You do not have access to any existing collections. You may create a new collection. 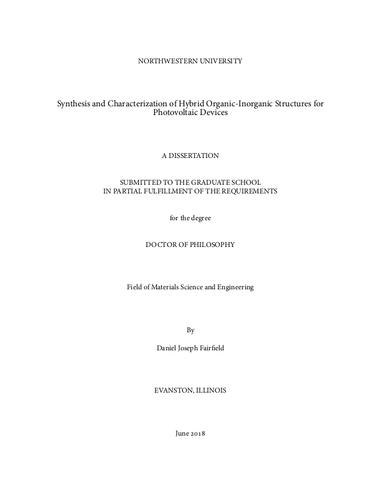 Developing low-cost, scalable, high-efficiency photovoltaic materials is an important technological challenge because of the projected increase in global energy consumption in coming years, the environmental cost of carbon emissions, and the widespread availability of solar energy. This dissertation contains three studies on the development of novel hybrid materials as photovoltaic active layers and uses structure-processing-property relationships to improve efficiency and stability in these photovoltaic devices. In the first study, an electrodeposited hybrid zinc oxide-organic lamellar structure was investigated as a potential photovoltaic active layer. The zinc oxide-organic lamellar structure formed nanoscale p-n junctions, and novel synthetic organic dyes balanced visible light absorption with solubility in the electrodeposition solvent mixture. Morphological characterization revealed that the electrodeposited structures formed thick, porous films. Grazing-incidence X-ray scattering studies showed that the hybrid lamellar structure will electrodeposit with a variety of organic dyes with non-crystalline packing, but the inorganic domains were invariably sub-nanometer thick sheets based on the layered double hydroxide structure. Initial thin film device experiments yielded very low power conversion efficiency, and thus dye-sensitized solar cells were fabricated with this nanoscale architecture as the active layer to improve efficiency in these devices. Single-step electrodeposition of these active layers represents a significant improvement to the throughput of the dye-sensitized solar cell manufacturing process. Functioning dye-sensitized devices were prepared from these lamellar scaffolds, although at lower efficiency than control bulk heterojunction or dye-sensitized devices. Various control devices and impedance spectroscopy explained why conventional device architectures such as dye-sensitized mesoporous scaffolds and bulk heterojunctions outperform this new nanostructured photovoltaic active layer. Specifically, within a dye-sensitized device, the electrolyte did not access the interior lamellar surfaces, and the dye molecules aggregated on the inorganic surface which caused recombination at the dye-electrolyte interface. In the second study, the stability of methylammonium lead iodide-based perovskite solar cells is improved by adding poly(acrylic acid) to the active layer. Adding polymers to methylammonium lead iodide perovskite solar cell active layers has previously been shown to increase the stability of the perovskite devices in dark, ambient conditions, but the nanostructures and stabilization mechanisms of these hybrid materials were poorly understood in these other studies. In this work, a structural and spectroscopic investigation on a number of perovskite-polymer hybrid materials was carried out, and their temporal stability as well as solar cell performance under operating conditions were compared. Using nanomechanical atomic force microscopy and transmission electron microscopy, perovskite crystallite sizes were observed to decrease with the addition of polymers, and the perovskite-polymer hybrid formed sub-micrometer-scale domains upon film casting. It is suggested that acid-base interactions, as well as facet-dependent interfacial interactions between perovskite and polymer, contributed to differences in stabilities of these hybrid materials. The polymers studied tended to suppress the formation of the hydrate crystal phase that accelerates the degradation reaction. Among these polymers, adding poly(acrylic acid) was found to significantly increase the stability of perovskite films under humid air and ambient illumination. Under these conditions, poly(acrylic acid)-perovskite hybrid solar cells maintained stable performance over a much longer time period than control devices. These results highlight the importance of choosing suitable functional groups in the polymer phase of perovskite solar cells to prolong their device lifetime. In the last study, novel layered perovskite structures were prepared using a systematic organic synthetic approach inspired by the approach followed in the zinc oxide studies. Layered perovskites have excellent environmental stability but poor photovoltaic function due to the preferential orientation of the semiconducting layers parallel to the substrate and the typically insulating nature of the cation. A series of these n = 1 layered perovskites with the form (aromatic-O-linker-NH3)2PbI4 were synthesized and characterized. These materials achieved enhanced conductivity perpendicular to the inorganic layers over three orders of magnitude higher than control layered perovskites with aliphatic organic cations due to better energy level matching between the inorganic layers and organic galleries. This study revealed two key structure-property relationships between cation conformation and optoelectronic properties. First, hydrogen bonding within the organic galleries can be used to avoid distortions of the inorganic lattice, resulting in narrower bandgaps. Secondly, out-of-plane conductivity in layered perovskites is enhanced by favorable Ï€-stacking interactions within the organic galleries. The enhanced conductivity and absorption of these materials led to a champion power conversion efficiency of 1.24%, which is the highest value reported for a chemically stable n = 1 layered perovskite. As a whole, these studies demonstrate three different approaches to creating hybrid organic-inorganic photovoltaic active layers and demonstrate the importance of leveraging the optoelectronic properties of organic constituents in order to enhance the chemical stability and photovoltaic efficiency of devices.