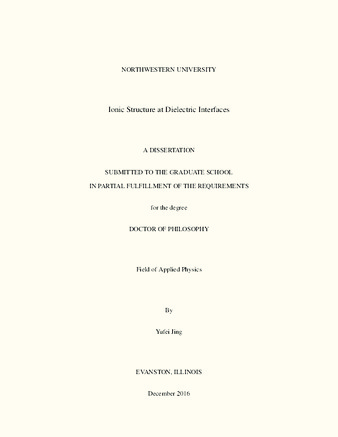 The behavior of ions in liquids confined between macromolecules determines the outcome of many nanoscale assembly processes in synthetic and biological materials such as colloidal dispersions, emulsions, hydrogels, DNA, cell membranes, and proteins. Theoretically, the macromolecule-liquid boundary is often modeled as a dielectric interface and an important quantity of interest is the ionic structure in a liquid confined between two such interfaces. The knowledge gleaned from the study of ionic structure in such models can be useful in several industrial applications, such as biosensors, lithium-ion batteries double-layer supercapacitors for energy storage and seawater desalination. Electrostatics plays a critical role in the development of such functional materials. Many of the functions of these materials, result from charge and composition heterogeneities. There are great challenges in solving electrostatics problems in heterogeneous media with arbitrary shapes because electrostatic interactions remains unknown but depend on the particular density of charge distributions. Charged molecules in heterogeneous media affect the media's dielectric response and hence the interaction between the charges is unknown since it depends on the media and on the geometrical properties of the interfaces. To determine the properties of heterogeneous systems including crucial effects neglected in classical mean field models such as the hard core of the ions, the dielectric mismatch and interfaces with arbitrary shapes. The effect of hard core interactions accounts properly for short range interactions and the effect of local dielectric heterogeneities in the presence of ions and/or charged molecules for long-range interactions are both analyzed via an energy variational principle that enables to update charges and the medium's response in the same simulation time step. In particular, we compute the ionic structure in a model system of electrolyte confined by two planar dielectric interfaces using molecular dynamics(MD) simulations and compared it with liquid state theory result. We explore the effects of high electrolyte concentrations, multivalent ions, and dielectric contrasts on the ionic distributions. We observe the presence of non-monotonous ionic density profiles leading to structure deformation in the fluid which is attributed to the competition between electrostatic and steric (entropic) interactions. We find that thermal forces that arise from symmetry breaking at the interfaces can have a profound effect on the ionic structure and can oftentimes overwhelm the influence of dielectric discontinuity. The combined effect of ionic correlations and inhomogeneous dielectric permittivity significantly changes the character of effective interaction between two interfaces. We show that, in concentrated electrolytes with confinement, it is imperative to take into account the finite-size of the ions as well as proper description of electrostatic interactions in heterogeneous media, which is not fully fulfilled by Poisson-Boltzmann based approaches. The effect of electric field at interface between two immiscible electrolyte solutions is studied as well. The classical Poisson-Boltzmann theory has been widely used to describe the corresponding ionic distribution, even though it neglects the polarization and ion correlations typical of these charged systems. Using Monte Carlo simulations, we provide an enhanced description of an oil-water interface in the presence of an electric field without needing any adjustable parameter, including realistic ionic sizes, ion correlations, and image charges. Our data agree with experimental measurements of excess surface tension for a wide range of electrolyte concentrations of LiCl and TBATPB (tetrabutylammonium-tetraphenylborate), contrasting with the result of the classical non-linear Poisson–Boltzmann theory. More importantly, we show that the size-asymmetry between small $Li^+$ and large $Cl^-$ ions can significantly increase the electric field near the liquid interface, or can even reverse it locally, at high salt concentrations in the aqueous phase. These observations suggest a novel trapping/release mechanism of charged nanoparticles at oil-water interfaces in the vicinity of the point of zero charge. In addition, we study the effects of size asymmetry and charge asymmetry on ion distribution at a dielectric interface using coarse-grained MD based on an energy variational principle. The goal is to explore charge amplification with exact consideration of surface polarization. We find that both size asymmetry and charge asymmetry lead to charge separation at the interfaces. In addition, charge separation is enhanced by interface polarization. We are currently extending the research to charged interfaces that has broad applications such as batteries and supercapacitors for energy storage.